Sanjeev Rajput was looking for gold before he had to settle for silver. 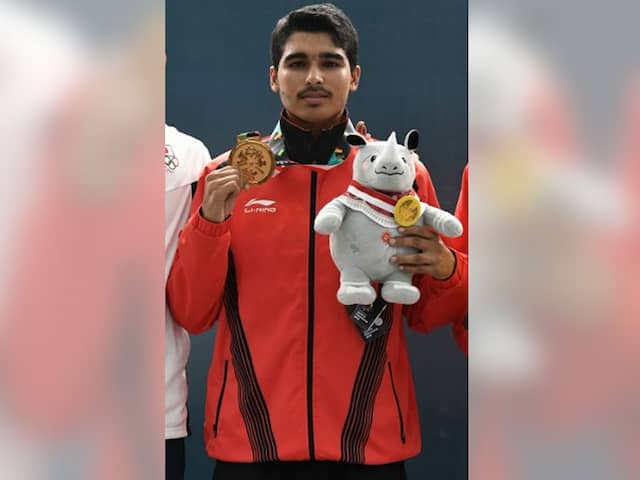 Saurabh Chaudhary was a star for India on the shooting range as the 16-year-old overcame a formidable team to claim gold in the 10-metre air pistol event, ahead of a formidable field. Then the 'jobless' Sanjeev Rajput, who looked good for gold for a long time in the 50-metre 3-position air rifle event, returned with a silver to add to India's shooting efforts in the Asian Games 2018. Another Indian making his international debut, 29-year-old Abhishek Verma, shot 219.3 to secure bronze in 10m air pistol event. Chaudhary aggregated 240.7. Rajput, 37, looked set for the gold before having a modest standing series in the 50 3 positions rifles final. It was the first individual medal for the former Navy man at the Asian Games, having won team medals in the previous three editions.

Rajput had a huge 3.0 lead after the kneeling and prone series. He had an average end to the finals but bounced back just in the nick of time to clinch silver. It was still a good result for the Yamuna Nagar shooter, who had also won gold at the recent Commonwealth Games.

With a rape case going on against him, he happens to be jobless, having being sacked as assistant coach from the Sports Authority of India last year.

"I hope to get a job now. Let's see. I shot an 8.4 in the end. That cost me the gold. The competition, the weather (hot) and wind conditions were very tough," Rajput told PTI.

Rajput shot 452.7 for the silver while the gold and bronze went to China's Hui Zicheng and Japan's Takayuki Matsumoto, who scored 453.3 and 441.4 respectively.

However, the day belonged to teenage prodigy Chaudhary, son of a farmer based in Kalina Village in Meerut district.

Competing in his first senior event, Chaudhary showed maturity and calmness well beyond his age to snatch the lead from 2010 World Champion Tomoyuki Matsuda on the penultimate attempt of the 24-shot pistol final.

The 42-year-old Matsuda from Japan misfired on the 23rd shot to settle for silver with an overall score of 239.7.

Expectations were high from Chaudhary as he had broken the world record on way to winning gold in the Junior World Cup in Germany couple of months ago. But not many thought that he would emulate the likes of Jaspal Rana, Randhir Singh, Jitu Rai and Ronjan Sodhi at such a young age to win an Asiad gold.

"I did not feel any pressure. It doesn't help," said Chaudhary, who picked up the sport only three years ago, when asked about the competition that included world champion Matsuda and Jong-oh from South Korea, the multiple Olympic and world champion.

Chaudhary, a student of class XI, will be off to the World Championships after the Games. He learned the tricks of the trade at Amit Sheoran's academy at Benoli near Baghpat, 53 km from Meerut. Whenever he is home, he helps his father in the farming business and likes to draw in free time.

"I like farming. We don't get much time off from training but whenever I do, I go back to my Village (Kalina) and help my father," he said.

Bronze medallist Verma also picked up the sport three years ago. The 29-year-old lawyer-cum shooter didn't begin well but saved his best for the last to win bronze. In the fifth series, he shot a couple of 10.7s to get himself into medal contention. He consolidated from there, producing a solid finish.

Comments
Topics mentioned in this article
Shooting Asian Games 2018 Other Sports
Get the latest Cricket news, check out the India cricket schedule, Cricket live score . Like us on Facebook or follow us on Twitter for more sports updates. You can also download the NDTV Cricket app for Android or iOS.