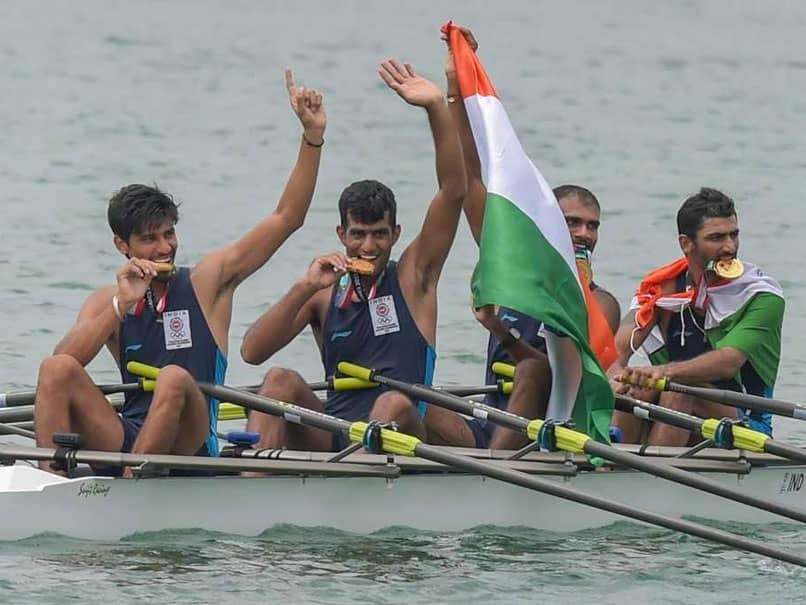 Rowers joined India's medal party on Day 6 of the Asian Games 2018 by adding a gold and two bronze medals to the country's medal tally. The day started with Dushyant winning bronze in men's Lightweight Single Sculls, which was followed by another bronze with Rohit Kumar and Bhagwan Singh finishing third in men's Lightweight Double Sculls. However, the icing on the cake came in the next rowing event with the four-man Indian team of Sawarn Singh/Dattu Bhokanal/Om Prakash/Sukhmeet Singh winning gold, India's fifth of the Games, in men's Quadruple Sculls.

After the three medals added by the rowers, India now have a total of 21 medals (5 gold, 4 silver and 12 bronze).

It all began with Dushyant, who had won Heat 1 in the qualification stage. He carried forward that form in the final, bettering his qualification time by quite some distance. Dushyant, who had clocked 7:43.08 in Heats but brought his A game in the final, clocking a time of 7:18:76 to finish behind gold medallist Korea's Hyunsi Park (7:12:86) and silver medallist Hin Chun Chiu (7:14.16) of Hong Kong.

Next up was the men's Lightweight Double Sculls event. Indian duo of Rohit Kumar and Bhagwan Singh had qualified for the final through the Repechage after finishing second in their Heat.

In the Repechage round, the Indian pair clocked the best time of 7:14.23 to top the charts and march into the final.

In the final, the Japanese and Korean teams proved too strong, leaving India to fight out for the bronze against Games host Indonesia. Rohit and Bhagwan easily beat the Indonesian challenge, finishing nearly 3 seconds ahead of them with a time of 7:04.61 to clinch the bronze.

The awesome-foursome had topped the charts and clocked the best time in the two heats combined (6:15.18). In the final, the four Indian rowers once again produced a sterling effort to clock a time of 6:17.13 to finish well ahead of silver medallist Indonesia (6:20.58) and bronze winners Thailand (6:22.41).

Comments
Topics mentioned in this article
Rowing Asian Games 2018
Get the latest updates on IPL 2021, IPL Points Table , IPL Schedule 2021 , live score . Like us on Facebook or follow us on Twitter for more sports updates. You can also download the NDTV Cricket app for Android or iOS.