Jyothi Surekha Vennam medallist first led the fight back in the team event and then followed it up by clinching another bronze when she pipped world number two Yesim Bostan of Turkey. 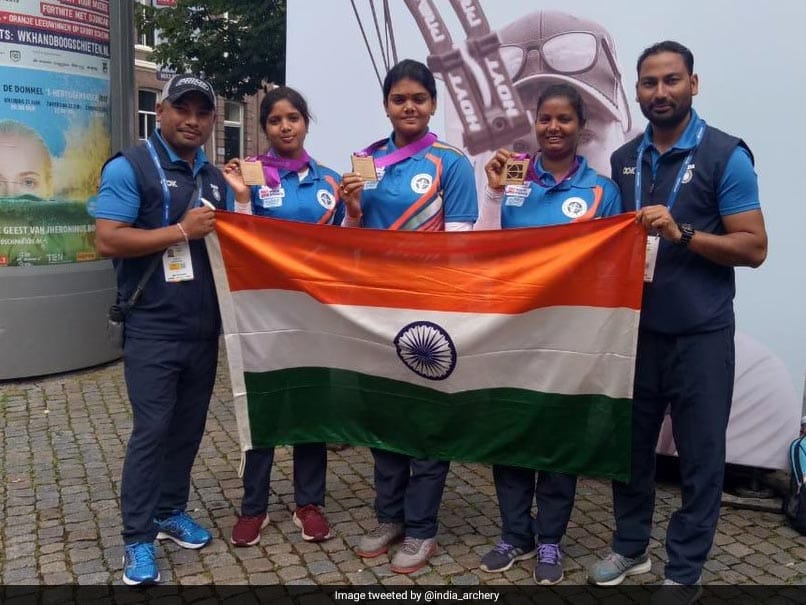 Jyothi Surekha Vennam produced a stellar show to help India clinch two bronze medals in the compound women's section of Archery World Championships on Saturday. The Asian Games silver medallist first led the fight back in the team event by shooting six perfect 10s out of eight arrows as India, also featuring Muskan Kirar and Raj Kaur, bounced back to down Turkey 229-226 in the bronze play-off. Jyothi Surekha Vennam then clinched another bronze in the evening session when she pipped world number two Yesim Bostan of Turkey 10-9 in the shoot-off after the duo were locked 145-all in five ends of 15 arrows each.

"Last time (Mexico City 2017) we won a silver but no regrets. We are happy to finish on the podium this time too," Jyothi said.

"World Championship medal means a lot as it comes after two years," added the 22-year-old from Vijayawada.

India are also in the fray for a possible first-ever World Championship gold medal when the men's recurve team takes on China on Sunday, in a bid to better their Madrid 2005 silver medal.

Jyothi, however, did not have the perfect start to the day when she shot in the outer circle for an 8 in the women's team bronze play-off as the Turk team of Yesim, Gizem Elmaagacli and Ipek Tomruk shot four perfect scores to win the first end by two points (57-55).

In the second end, the Turkey team failed to find the centre even once, while shooting an 8. The Indians snatched the opportunity and grabbed a three-point lead, winning by 58-53 with Jyothi finding her rhythm back.

Trailing by three points at the midway stage, the Turks got off to a solid start to the third end with four perfect shots and an X to aggregate 58.

But the Indians remained unnerved and shot three 10s and one closest to the centre to level the third end (58-58) that kept their three-point lead intact.

It was about holding their nerves as India once again shot a consistent 58 to level the fourth end that was enough to clinch the bronze.

"It's my first world championship medal, so I'm really excited. They put up a solid show, but we did better than them," Raj Kaur, who made a World Championship debut, said.

In the individual bronze play-off, Jyothi established a one-point lead after nine arrows but Yesim had two flawless ends of 60/60 to snatch a two-point lead going into the decider.

Under pressure, Jyothi was at her best to shoot three perfect 10s, including two closest to the centre, for a 145-145 draw, forcing the match into the tie-break.    There was no stopping Jyothi as she shot another perfect shot of 10 while her opponent wilted under pressure to miss the mark by one point.

"This is my first individual medal at the World Championships. I was a little nervous but I thought I would give my best. She also shot very well and kept the pressure," Jyothi said.

Asked about the 10 in the shoot-off, she said, "I thought I would shoot my arrow like how I do it every time."

Comments
Topics mentioned in this article
Archery
Get the latest updates on ICC T20 Worldcup 2022 and CWG 2022 check out the Schedule, Live Score and Medals Tally. Like us on Facebook or follow us on Twitter for more sports updates. You can also download the NDTV Cricket app for Android or iOS.