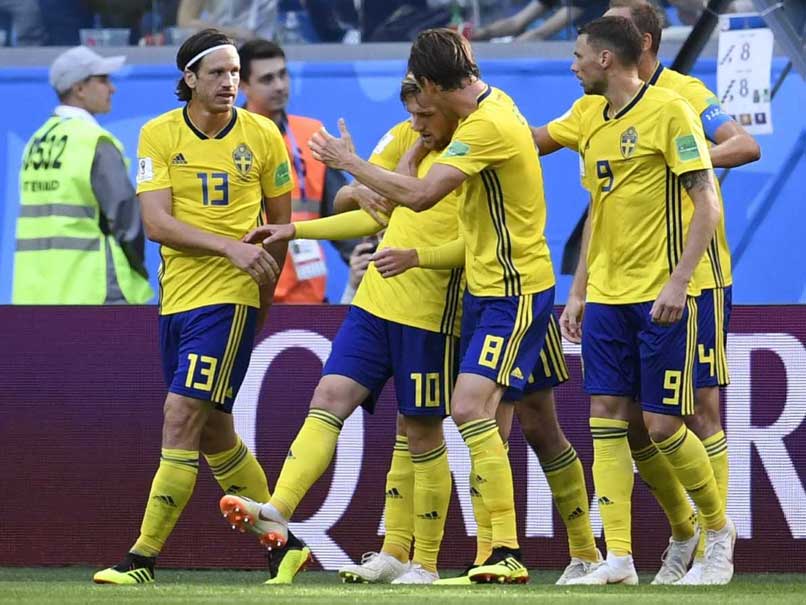 Sweden beat Switzerland 1-0 to reach the World Cup quarter-finals on Tuesday, with a deflected Emil Forsberg effort proving the difference between the two sides. The match in Saint Petersburg was a tight encounter of few chances but Forsberg's shot in the 66th minute took a deflection off Manuel Akanji, leaving goalkeeper Yann Sommer stranded. Sweden will meet either England or Colombia in the last eight. The World Cup last-16 match between Sweden and Switzerland was goalless at half-time in Saint Petersburg on Tuesday, after a low-key opening 45 minutes. The Scandinavians had the better of the first-half chances, but striker Marcus Berg blazed off target when well-placed before seeing Swiss keeper Yann Sommer turn his low shot around the post. (HIGHLIGHTS: Sweden vs Switzerland)

21:24 IST: FT Sweden 1-0 Switzerland.The Swiss who dominated a staggering 64 per cent of the possession, go out of the World Cup as Sweden seal a quarters berth in which they will either see Colombia or England. That's all we have for the day, until next time, it's goodbye!

21:19 IST: No penalty for Sweden confirms VAR,RED CARD FOR MICHAEL LANG though!Sweden will take a free-kick from the edge of the box, Ola Toivonen hits it straight as the goalkeeper Yann Sommer keeps the ball out. The referee then blows for the final whistle.

21:17 IST: 3 minutes added,Switzerland containing the ball, attacking through the left flank Rodriguez bends one inside the box to his target man Drmic who head it but Olsen dives to keep the ball away from crossing the line.

21:15 IST: Desperate moments for Switzerland, combing well to snick one before it's too late but nothing going in favour of them at the moment.

21:12 IST: Flurry of attack from Switzerland,Rodriguez followed by Drmic take a shot each before Shaqiri delivers a ball which goes away for a Sweden goal kick.

21:05 IST: Corner for Switzerland,Shaqiri takes it, Embolo's header was well directed but Forsberg does well to clear it away. 80 minutes on the clock.

21:02 IST: Corner for Sweden, Forsberg deliversnot a good hit but the ball falls back for the Swede which is miscued for a Swiss free-kick. 77 minutes played.

20:57 IST: Free-kick for Switzerland,Rodriguez delivers, not cleared well by the Swede as the deflected shot off Shaqiri goes away from corner -- opportunity wasted but the Swiss retain possession. 72 minutes played.

20:55 IST: Ekdal now takes a shot outside the box,but the ball goes high over the crossbar, Sweden look to be in the mood here though Switzerland have dominated most of the possession.

20:52 IST: GOAL! Sweden scores through Forsberg,after he makes a brilliant run from left to right ans shoots from outside the box as the ball takes a bit of deflection to end at the back of the net. Sweden 1-0 Switzerland after 66 minutes.

20:50 IST: Free-kick for Sweden on the edge of the box,Forsberg delivers from the right flank but the ball comes off from the wall.

20:47 IST: Xhaka plays a miscued shot from the edge of the box,as Sweden retain possession but fail to contain it.

20:38 IST: Corner for Switzerland, Shaqiridelivers a curling ball inside the box on the second away but it gets tucked away by Olsen. 52 minutes played so far.

20:37 IST: Switzerland on the ball,setting the tempo back in the second-half. The VAR has not been used in the match so far.

20:36 IST: Ola Toivonen misses it for Sweden,after a cross finds him in space but he skies the volley over the crossbar.

20:34 IST: Free-kick for Sweden,Augustinsson bends the ball in as it gets cleared away from the Swiss defence inside the box.

20:32 IST: Switzerlandgets the second half underway.

20:15 IST: One minute added for half-time.Xhaka finds Rodriguez who crosses the ball but Olsen punches it away and referee blows the whistle.

20:13 IST: 43 minutes played,goalless so far. Shaqiri gets a good looking cross but no one inside the box to tuck the ball inside the net. Sweden retain possession.

20:09 IST: Free-kick for Sweden from a promising position,Forseberg takes it deflects off the wall for a corner. Forsberg takes it, Lustig delivers a brilliant cross from the right wing finds Ekdal in space but he skies the ball over the crossbar.

20:08 IST: Zuber plays a brilliant one-two finds Dzemaili in space,but he skies the ball over the crossbar. A well-made chance, missed!

20:06 IST: Corner for Switzerland, Rodriguez take it,Shaqiri gets a shot. Sweden looks to break on the counter but fail to get going. The Swiss retain and dominate possession.

20:03 IST: Granit Xhaka takes a shot from long range,the ball was dipping at the end but fails to find the net. 33 minutes on the clock, still goalless.

20:00 IST: Free-kick for Switzerland,Ricardo Rodriguez takes it away from the wall. Olsen collects it with ease.

19:57 IST: SAVED! Marcus attempts to put the ball past Olsen in the far corner,but the Swiss goalkeeper does well to keep it out. 30 minutes played.

19:53 IST: Shaqiri delivers a brilliant ball inside the box to find Zuber -- the target-maninside the box, who heads it just over the crossbar.

19:52 IST: Shaqiri over-ran with the ball,to see it lose to Forsberg in the right flank.

19:47 IST: Switzerland playing inside their own half,trying to get on attack. Rodriguez delivers a ball from left flank inside the box only to see it cleared off the Swede defence. Both Switzerland and Sweden have score 5 goals in the tournament so far.

19:41 IST: Shaqiri plays a delicious chipfor Dzemaili who gets two touches inside the box before Olsen charges to grab the ball safely.

19:39 IST: Sloppy play from Switzerland as Ekdalskies a volley high over the crossbar, 10 minutes played so far.

19:37 IST: Steven Zuber from the left flank, finds spacebut his shot is straight into the glove of the Swedish goalkeeper Robin Olsen.

19:33 IST: Switzerland keeping the ball better, well organised,Sweden pushed back, five minutes played so far as Switzerland look to attack from left flank but lose the ball as Sweden's Forsberg plays a heavy ball ahead to see it go for a goalkick.

19:31 IST: Free-kick for Sweden, the ball is delivered inside the box.But cleared away from a header by the Swiss defence.

19:30 IST: And Shaqiri straight on gets involved,goes for a long-range effort wide off the target.

19:30 IST: Kick-off!Sweden gets the match underway.

19:28 IST: Team sheets exchanged, coin toss done.We are couple of minutes away from the kick-off.

19:25 IST: Swedish national anthembuzzes at the centre-stage, Switzerland follows. We are five minutes away from the kick-off.

18:30 IST:The complete line-up between Sweden and Switzerland for the Round of 16 clash has been announced.

18:15 IST: Swiss national starXherdan Shaqiri looks ready for the crucial clash, a lot of onus on him to get his national side into the quarters.

18:15 IST: Former Swede star Zlatan Ibrahimovic has 'got his back' against the national side, which looks in readiness to take on the Swiss.

18:08 IST:The two sides in this match come into the game with differing fortunes in their preceding matches: Sweden thumped high-flying Mexico 3-0, while Switzerland were pegged back twice in a 2-2 draw with already-eliminated Costa Rica.

18:05 IST: Two crucial spots at stake for the quarter-final.Who are you betting on?

Two spots in the quarter-finals remain... who is going to get them? #SWESUI // #COLENG pic.twitter.com/OJ8hfimsmj

18:02 IST:Just over an hour to go for the crucial contest between Sweden and Switzerland in the double-header Tuesday, we have Colombia playing England later in the day.

18:00 IST: Hello and welcome to the live commentary from the Round of 16 clash between Sweden and Switzerland.

Sweden have now gone as far as they ever did with Ibrahimovic at a World Cup and could go much further in a wide open half of the draw.

Beat Switzerland and they will face England or Colombia, with Croatia or Russia waiting as potential semi-final opponents.

Switzerland have made headlines in Russia for their players' controversial goal celebrations but the team stands on the verge of matching their best-ever run at a World Cup.

If Vladimir Petkovic's side beat Sweden in Saint Petersburg on Tuesday, they will become the first Swiss team in 64 years to qualify for the quarter-finals of football's biggest tournament.

Although they have largely gone under the radar in Russia -- double-eagle scoring celebrations against Serbia aside against -- the unheralded team are enjoying an impressive tournament.

Sweden 2018 FIFA World Cup Sweden vs Switzerland, Round of 16 Football Live Score Live Blogs Football
Get the latest updates on ICC T20 Worldcup 2022 and CWG 2022 check out the Schedule, Live Score and Medals Tally. Like us on Facebook or follow us on Twitter for more sports updates. You can also download the NDTV Cricket app for Android or iOS.