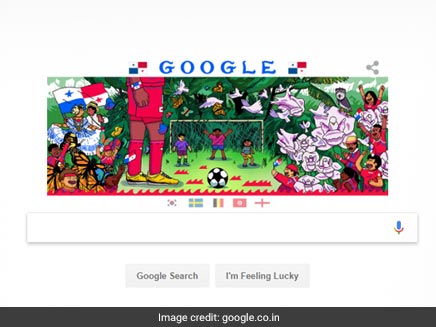 Google Doodle highlighted Day 5 the FIFA World Cup 2018, with big European teams Belgium and England set to make their first appearance in what has so far been a sensational World Cup 2018, with upsets galore marking the tournament. Day 4 saw defending champions Germany go down to Mexico in what was the biggest upset of the World Cup so far. Germany looked a far cry from the team that won the title in 2014. Not just that, the tournament also saw Brazil being held by Switzerland.

Brazillooked like running away with the match with a sensational Philippe Coutinho goal but Switzerland fought back in the second half to score off a corner from one of the rare forays they made in the Brazilian half.

The Brazilians, with Neymar in their line-up, could not break the Swiss defence down and the Europeans were ecstatic with the point they snatched.

Day 5 will see Belgium in action against debutants Panama. Belgium, with one of the most powerful line-ups in FIFA World Cup 2018, are carded as one of the favourites.

England will take on the African challenge of Tunisia. England have always flattered to deceive but this time around, they are boasting of a competitive team.

In an earlier match, South Korea and Sweden will see if they can make the most of Brazil losing two points and post a win and climb to the top of the points tally from Group F.

Tunisia 2018 FIFA World Cup Football Tunisia vs England, Match 14 Belgium vs Panama, Match 13
Get the latest updates on ICC T20 Worldcup 2022, check out the Schedule and Live Score. Like us on Facebook or follow us on Twitter for more sports updates. You can also download the NDTV Cricket app for Android or iOS.