Nothing less than winning the World Cup in Russia next month will be satisfactory despite England's failure to even progress to the later stages in recent tournaments, insist Three Lions' stars Raheem Sterling and Dele Alli. 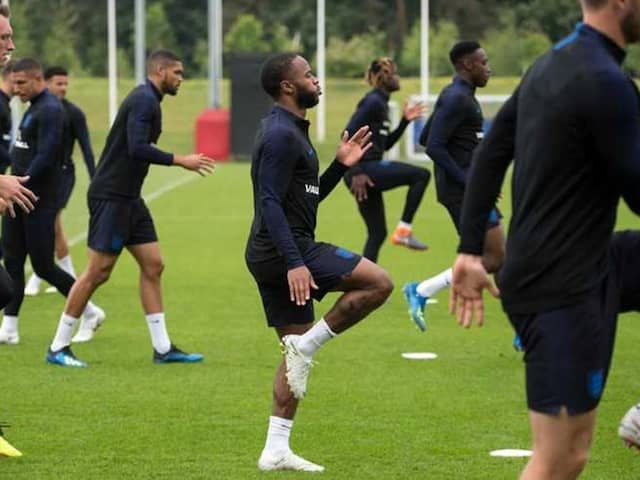 Raheem Sterling was part of the England sides that crashed out at the group stages four years ago.© AFP

Nothing less than winning the World Cup in Russia next month will be satisfactory despite England's failure to even progress to the later stages in recent tournaments, insist Three Lions' stars Raheem Sterling and Dele Alli. Gareth Southgate's men travel to their base in Repino, north-west of Saint Petersburg, next week looking to end 52 years without winning a major tournament since the 1966 World Cup. Sterling was part of the England sides that crashed out at the group stages four years ago and exited in humiliating fashion to Iceland in the last 16 of Euro 2016.

But the Manchester City winger rejected suggestions England should be happy with progress to the quarter-finals this time round.

"No, it won't be good enough at all, because you want to win it," Sterling said at England's pre-tournament media day.

"I'm not coming here to spend four, five, six weeks of my life to say 'let's see what happens and hopefully last 16'."

And Tottenham midfielder Dele Alli believes "the sky is the limit" for a talented young squad.

"We have a young, hungry team that wants to achieve greatness, we want to bring the country together and achieve something great," said Alli.

"I don't think we can put limits on it, the sky is the limit."

Alli also played in the defeat to Iceland two years ago and believes that those still in the squad will have learned from that harrowing experience.

"I think we learned a lot as players, it was one of the best moments of my career and one of the worst as well with the way it ended," added Alli.

"We have to prove to ourselves -- we are excited, we have a strong team and there is a lot of belief we can achieve something great within the squad."

Sterling has endured a difficult week of media coverage over a tattoo of an M16 assault rifle on his leg.

He explained the tattoo references the shooting of his father who was gunned down in Jamaica when the Manchester City winger was just two years of age.

Adding to Sterling's woes, he was forced to apologise to his team-mates after turning up to England's training camp a day late following a flight mix-up on his way back from holiday and was then booked for diving in Saturday's 2-1 friendly win over Nigeria.

However, Sterling has been publicly backed by his manager Gareth Southgate and been handed the number 10 shirt for the World Cup.

And despite the negative publicity surrounding his tattoos, Sterling revealed he's had a tattoo of the number 10 on his arm for some time such has been his desire to wear that number for his country.

"I know I shouldn't mention it but I've got a tattoo of it on my arm," he added. "It's something I've always wanted to do: wear the number 10 for England.

"It's something from my childhood. My two favourite numbers are seven and 10, from playing at Queen's Park Rangers in the midfield area. I feel much more happy wearing that shirt and to be doing that at a World Cup with my country gives me that huge joy and feeling I can go and do well."

England Raheem Sterling Dele Alli Football
Get the latest Cricket news, check out the India cricket schedule, Cricket live score . Like us on Facebook or follow us on Twitter for more sports updates. You can also download the NDTV Cricket app for Android or iOS.