Quick as a flash, he picked up his camera and took some remarkable close-up shots of the Croats' joy. 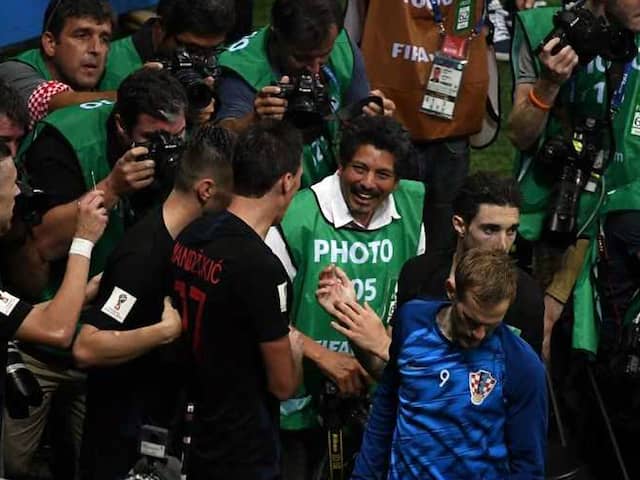 Croatia players ran towards photographer Yuri Cortez, who was positioned next to the advertising boards.© AFP

When Croatia scored the goal that took them into the World Cup final on Wednesday, an AFP photographer unwittingly became part of the celebrations as he was buried under a pile of joyous players.

After Mario Mandzukic scored in extra-time to give Croatia a 2-1 win against England in the semi-final, he ran to a corner of the pitch at Moscow's Luzhniki Stadium to share his joy with his teammates.

"I was just changing my lens as the players ran towards me," said photographer Yuri Cortez, who was positioned next to the pitchside advertising boards.

"They just kept coming towards me and they fell on me! It was a crazy moment, they were delighted. Then they suddenly realised that I was underneath them," said Mexico City-based Cortez.

Quick as a flash, he picked up his camera and took some remarkable close-up shots of the Croats' joy.

"Then they asked me if I was OK. Another one picked up my lens and another player (Domagoj Vida) gave me a kiss."

Croatia, who have reached the final for the first time in their history, will play France on Sunday.

England 2018 FIFA World Cup Football Croatia vs England, Semi-Final 2
Get the latest updates on IPL 2020, check out the IPL Schedule for 2020 and Indian Premier League (IPL) Cricket live score . Like us on Facebook or follow us on Twitter for more sports updates. You can also download the NDTV Cricket app for Android or iOS.