FIFA World Cup 2018, Highlights, Nigeria vs Argentina: Marcos Rojo scored the winner for Argentina as they qualified for the Round of 16. 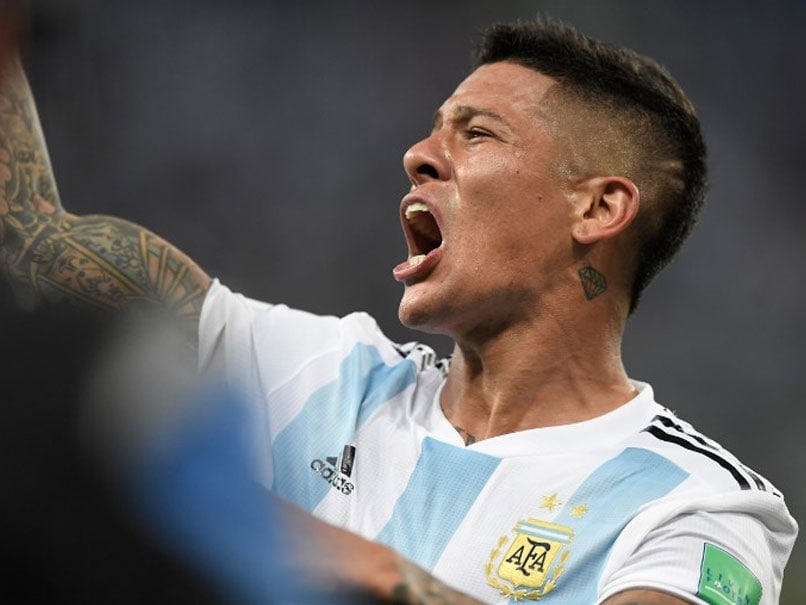 Marcos Rojo's stunning finish four minutes from time kept Lionel Messi and Argentina's World Cup hopes alive to see off Nigeria 2-1 on Tuesday and set up a last 16 meeting with France. Messi's first goal of the tournament got the two-time winners off to a perfect start in Saint Petersburg, but Victor Moses's 51st minute penalty had Jorge Sampaoli's men headed for a humiliating group stage exit until Rojo's late intervention. The Manchester United defender, who had escaped conceding a second Nigerian penalty moments earlier after a controversial VAR review, thundered home Gabriel Mercado's cross to send the under-fire Sampaoli running down the sidelines amid wild scenes of celebration. (Highlights: Nigeria vs Argentina) (Highlights: Iceland vs Croatia)

Mere numbers cannot begin to describe the drama and excitement that football provides.

01:25 IST: FULL-TIME | Argentina beat Nigeria 2-1 to qualify for the Round of 16.Marcos Rojo scored the winner for the Lionel Messi-led team.

Maximum points for #CRO as they top Group D.
They face #DEN on Sunday in Round of 16. pic.twitter.com/SeKh61ubGt

01:19 IST:Four minutes of added time for both the Group D matches.

01:16 IST: GOAALL!! 87th minute --Marcos Rojo is the saviour for Argentina tonight as he appears from nowhere and puts the ball in the back of the Nigerian goal. Argentinians are ecstatic and they are back in the driving seat.

#ARG left it late. So, very late.
Next up on Saturday.....#FRA.pic.twitter.com/RpDaYrOsSx

01:12 IST: 84th minute -- Nigeria get a free-kick in a dangerous position. Etebo curls the ball in only to find the side of the net.

01:09 IST:Just over ten minutes to go and Higuain misses an opportunity to the ball in the back of the net. Argentina have created a lot more chances but none of them were converted.

01:00 IST: 20 minutes of left play --Both the teams are trying their hard to score another goal.

00:50 IST:Pavon makes a dash down the right flank, crosses but Ekong slides and clears away the ball for a corner. Di Maria misses an opportunity with a header.

Meanwhile, in Rostov-On-Don...#CRO take the lead!

00:39 IST: GOOAALLL!!Mascherano gets booked for a yellow card as the referee blows his whistle and Nigeria have a penalty. Victor Moses scores from the spot to give his team an important equaliser. |Nigeria 1-1 Argentina.

Group D as it stands currently...

00:35 IST:The second-half of the Nigeria vs Argentina match and Iceland vs Croatia starts.

#ARG have won 29/30 World Cup matches in which they were leading at half-time, the only exception the 4-2 defeat in the 1930 final against #URU

Saint Petersburg Stadium is the 100th stadium where Leo Messi has scored a goal for #ARG or Barcelona #NGAARG pic.twitter.com/Lm1Xo3yDRw

00:17 IST: HALF-TIME |Argentina lead Nigeria 1-0 and it is still goalless in the Iceland vs Croatia match.

00:15 IST: Two added minutes for the both the Group D matches.

Players to score Goal 100 of a #WorldCup

Not a bad collection of players pic.twitter.com/4cqSvG6pui

00:03 IST: 33rd minute --Leon Balogun is booked for clipping Di Maria's heel as the latter for making a run down the middle. Argentina get a free-kick. Messi curls the ball in but Uzoho dives to his left and gets his finger tips as the ball hits the far post and bounces off.

00:00 IST: 30 minutes are up -- Argentina look confident as Nigeria are yet to find their footing. In the other game, Croatia are dominating Iceland.

23:57 IST: 27th minute -- Messi provides a brilliant pass down the middle as Higuain charges and reaches the ball but the Nigerian keeper, Francis Uzoho, got to the ball just seconds before. Close, close chance as Argentina would've doubled their lead.

23:55 IST: After 25 minutes, it is still goalless in the match between Iceland and Croatia.

23:54 IST:Argentina have woken up after the goal as they are controlling the tempo of the game and are creating chances. Nigeria, on the other hand, have failed to capitalise on two of their chances.

23:44 IST: GOAAALLL!!! Lionel Messi scores as Argentina lead Nigeria 1-0 in the 14th minute. Banagea gets possession, looks for Messi and passes to Messi, who was making his run down the middle. Messi receives the ball on hi chest, controls and shoots the ball past the Nigerian keeper.

The perfect start for @Argentina on a huge night of football. #NGAARG 0-1 pic.twitter.com/RbGhyMGBqk

23:40 IST:Messi makes a run down the left flank but the Nigerian defence does not let the ball through.

23:37 IST:Eteboget an early opportunity but the Argentinian defence blocks the shot. On the counter, Messi is fouled as Argentina get a free-kick. Banega slips a clever pass through to Tagliafico, who charges into the area but shoots high and wide.

23:35 IST: Five minutes are up -- Both Argentina and Nigeria look nervous and the passes are going astray.

23:25 IST: Nigeria and Argentina are walking out of the tunnel for their respective national anthems. In the other match -- Iceland vs Croatia -- the pre-match rituals are taking place.

23:20 IST:We are few minutes away from the kick-off. Stay tuned.

Who's ready for the final matches of Group D?

22:00 IST: Hello and welcome to the live blog of the matches between Nigeria-Argentina and Iceland-Croatia.

And his 31st birthday on Sunday only served to highlight how time is running out for Messi to win a major international tournament. Without the five-time World Player of the Year, though, it is highly unlikely Argentina would even have qualified. Messi salvaged a disastrous campaign under three different managers with a hat-trick away to Ecuador in the Albiceleste's final qualifier.

Croatia 2018 FIFA World Cup Football Nigeria vs Argentina, Match 39 Iceland vs Croatia, Match 40 Live Blogs
Get the latest updates on IPL Auction 2023 and check out  IPL 2023 and Live Cricket Score. Like us on Facebook or follow us on Twitter for more sports updates. You can also download the NDTV Cricket app for Android or iOS.