Israel accused the Palestinians of "football terror", saying their threats saw Barcelona superstar Lionel Messi and his team abandon what would have been Argentina's final friendly match ahead of the World Cup. 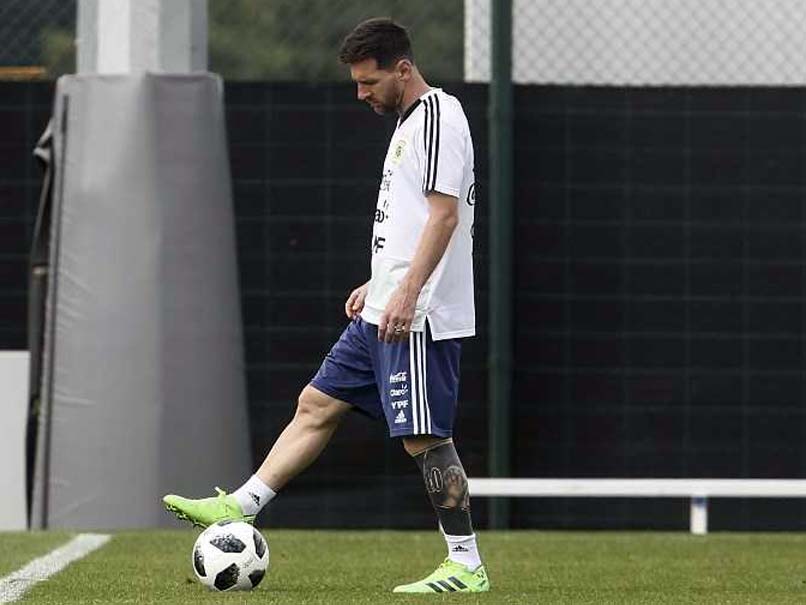 Messi is looking to inspire Argentina to victory in Russia, having lost in the final four years ago.© AFP

The Israeli and Palestinian football associations traded accusations Wednesday over the cancellation of aWorld Cup warm-up match between the Jewish state and Argentina in the disputed city of Jerusalem. Israel accused the Palestinians of "football terror", saying their threats saw Barcelona superstar Lionel Messi and his team abandon what would have been Argentina's final friendly match ahead of the World Cup. The Palestinians rejected the allegation, saying the Argentinians pulled out of the match as they realised Israel was using their presence for political gain. The encounter was called off on Tuesday after a campaign by the Palestinians following its relocation to Jerusalem.

He accused them of threatening players and their families, without providing any evidence.

"We are seeing it as crossing a red line and we cannot accept it," Kamer said, adding an official complaint would be sent to world football's governing body FIFA.

The sold-out game in Jerusalem was hotly opposed by Palestinians, who claim the eastern part of the city, occupied and later annexed by Israel, as the capital of their future state.

It had originally been scheduled to take place the northern Israeli city of Haifa but was moved after pressure from Israel's hardline sports minister, Miri Regev.

Palestinians were already angered by US President Donald Trump's transfer of the US embassy from Tel Aviv to Jerusalem in May, which sparked protests in Gaza in which dozens of Palestinians were killed.

Ahead of the game Rajoub had urged Messi not to take part and called on fans to burn shirts bearing his name if he did.

Speaking on Wednesday, he thanked the Argentinians for the cancellation, saying he hopes they will win the World Cup.

"I think what happened yesterday is a red card from everybody to the Israelis to (get them to) understand that they (only) have a right to organise, or play football within their internationally recognised borders," he said in English, pointing out the final status of Jerusalem is supposed to be the subject of negotiations between the parties.

Rajoub laughed off Israeli threats of action, denying there was any intimidation.

"The Argentinian Football Association cancelled the agreement it signed with the Israelis because it reached the conclusion that this match is a political one."

Israeli media said that late Tuesday Prime Minister Benjamin Netanyahu called Argentine President Mauricio Macri, with whom he has good relations, in an effort to save the match but that Macri had said he was unable to intervene.

Netanyahu is currently visiting Europe and his office could not immediately confirm the reports.

Israeli daily Yisrael Hayom, considered close to Netanyahu, expressed ire at Argentina with its front-page headline: "They surrendered to terrorism: The game against Argentina has been cancelled."

Argentine Foreign Minister Jorge Faurie said before confirmation of the game's cancellation that he believed his country's players had been reluctant to travel to Israel for the match.

"As far as I know, the players of the national team were not willing to play the game," Faurie said.

The Argentina squad practised on Wednesday morning at FC Barcelona's training ground, just a few hours after the friendly match was called off.

"Argentina is seven days from the World Cup. We want to focus on what is really important and which is before us," a spokesman for the country's football federation told AFP in Barcelona, where the national team has been training ahead of the start of the tournament in Russia on June 14.

The status of Jerusalem, always a key sticking point in the Israeli-Palestinian dispute, surged back to centre-stage when Trump tore up decades of US policy to recognise it as Israel's capital in December.

The United States shifted its Israeli embassy to Jerusalem in May on the 70th anniversary of the creation of Israel, in a move met with condemnation from the Palestinians and many of Washington's international allies.

At the same time, Israel has faced fierce criticism over its use of lethal force against Palestinian protesters on the Gaza Strip border with the Jewish state.

Israeli troops have killed at least 125 Gazans since March 30, during protests and clashes along the border over the return of Palestinians to land they fled or were expelled from during the 1948 war surrounding Israel's creation.

The press in Argentina and Israel reported that the Argentine Football Association was supposed to receive a payment of between two and three million dollars if Messi played.

Argentina coach Jorge Sampaoli last week aired misgivings about having his players make the trip to Israel, noting he preferred to remain in Barcelona.

"From a sporting point of view, I would have preferred to play in Barcelona," Sampaoli said.

Messi is looking to inspire Argentina to victory at the World Cup, having lost in the final four years ago.

Israel has not qualified for the tournament.

Lionel Messi Football 2018 FIFA World Cup
Get the latest updates on IPL Auction 2023 and check out  IPL 2023 and Live Cricket Score. Like us on Facebook or follow us on Twitter for more sports updates. You can also download the NDTV Cricket app for Android or iOS.