Teenage star Kylian Mbappe played down comparisons with Brazil legend Pele after stealing the show in a 4-3 victory for France that sent Argentina crashing out of the World Cup. 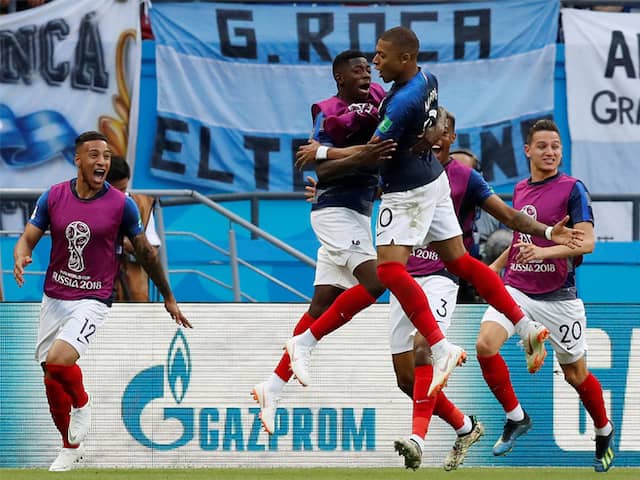 Kylian Mbappe played down comparisons with Pele after stealing the show in a 4-3 victory for France.© Reuters

Teenage star Kylian Mbappe played down comparisons with Brazil legend Pele after stealing the show in a 4-3 victory for France that sent Argentina crashing out of the World Cup. Billed as Lionel Messi's chance to reignite stuttering Argentina's hopes, the thrilling last-16 clash in Kazan instead saw 19-year-old Paris Saint-Germain star Mbappe showcase his sublime skills as he became the first teenager since Pele in 1958 to score at least two goals in a World Cup match. "I'm very happy, and it's flattering to be compared to a great player like Pele," said Mbappe after his two second-half goals set up a quarter-final clash with either Uruguay or Portugal.

"But he's in another category. Still, it's great to join the list of players that have achieved such feats."

Mbappe was born in the Paris suburbs in 1998, the year Les Bleus secured their first World Cup title under captain Didier Deschamps.

After his man-of-the-match performance overshadowed a mediocre display by Messi and Argentina, Mbappe laughed off suggestions that 1998 will be more remembered as the year of his birth,.

"For me there's no debate... it was the first time we were world champions."

Mbappe could now go on to become one of the stars of the World Cup, and he added: "All the big players are at the World Cup.

"It's an opporutunity to show what we can do. There's no bigger stage in football."

Lionel Messi Kylian Mbappe Pele 2018 FIFA World Cup France vs Argentina, Round of 16 Football
Get the latest Cricket news, check out the India cricket schedule, Cricket live score . Like us on Facebook or follow us on Twitter for more sports updates. You can also download the NDTV Cricket app for Android or iOS.