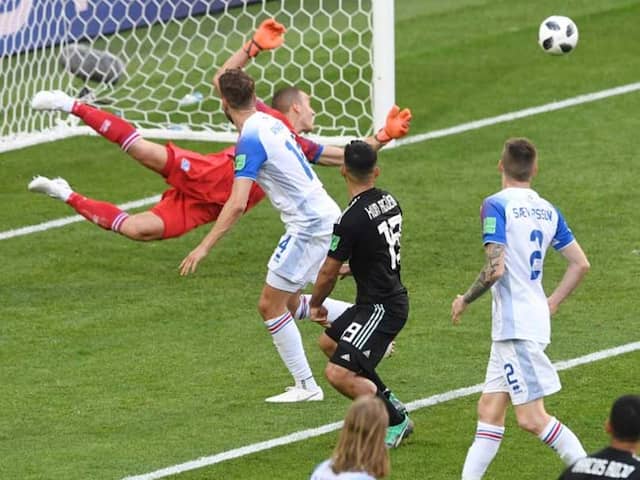 Iceland's goalkeeper Hannes Halldorsson was the hero in the FIFA World Cup tie between Argentina and Iceland as he saved a crucial Lionel Messi penalty that helped his team hold the two-time champions to a 1-1 draw at the Moscow's Spartak Stadium on Saturday. Halldorsson changed the complexion of the match when he palmed away Messi's spot kick in the 63rd minute to prevent a second Argentinian goal. Post his Herculean effort, the Iceland keeper described the moment as "dream come true." Meanwhile, he also added that he worked on psyching out the Argentine superstar by studying him thoroughly.

"I did some homework because I knew this was a situation that could come up. It was a long shot but it happened," said the Man of the Match.

"I looked at a lot of penalties from Messi and I also looked at how I've been behaving during the last couple of penalties," Halldorsson explained.

"I tried to get in their minds, so they'd be thinking about me. I had a good feeling he'd go this way today," remarked the Iceland keeper.

He said that the draw felt like a win for Iceland, who are making their first World Cup appearance but famously eliminated England at Euro 2016 to reach the quarter-finals.

Halldorsson said the Argentina result was similar to Iceland's draw with Cristiano Ronaldo's Portugal at those championships because it provided a springboard to make it to the knockout phase.

Iceland's next opponents are Nigeria in Volgograd next Friday.

Lionel Messi 2018 FIFA World Cup Football Argentina vs Iceland, Match 6
Get the latest Cricket news, check out the India cricket schedule, Cricket live score . Like us on Facebook or follow us on Twitter for more sports updates. You can also download the NDTV Cricket app for Android or iOS.