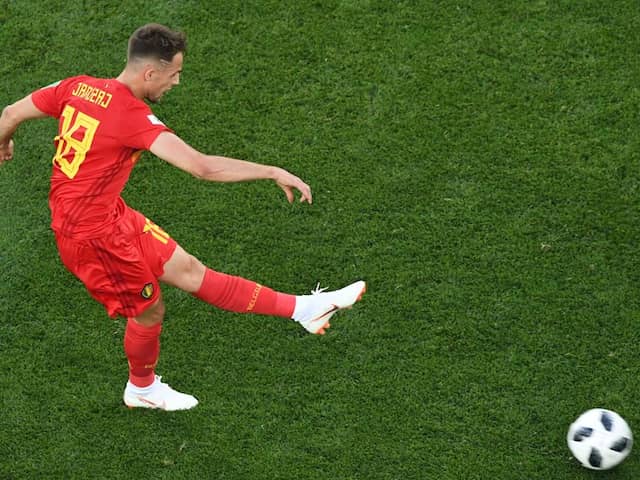 A brilliant strike by Adnan Januzaj lit up an otherwise insipid clash as Belgium beat England 1-0 to secure top spot in World Cup Group G in Kaliningrad on Thursday. Januzaj's superb second-half goal sent Belgium into a last 16 clash with Japan while England will now advance to a second round meeting with Colombia on Tuesday. By finishing second in the group, England have though avoided a loaded top half of the draw containing past winners Brazil, France, Argentina and Uruguay as well as European champions Portugal. The fact second place in the group was no disaster seemed to be a big factor in both coaches' team selection with their places in the last 16 already secured. (Highlights: England vs Belgium)

01:16 IST: Mertens, who came in the place of Januzaj, shoots from outside the box and Pickford dives to his right to block the ball. That was hit powerfully.

01:09 IST: 82nd minute -- Rashford delivers a corner, Welbeck gets the ball and shoots. Fellaini blocks the shot with his right foot.

01:07 IST: That was beautiful from Rashford. England get a free-kick yards outside the box, Rashford curls the ball in over the defensive wall as the ball passes inches over the cross bar.

00:55 IST: Captain Harry Kane is warming up on the sidelines.

00:53 IST: 65th minute -- Marcus Rashford misses a simple chance. Vardy provides Rashford with a brilliant pass down the middle that saw Rashford being one-on-one with Courtois. Rashford attempts the curler and the ball brushes Courtois's finger and goes wide. Should've made a pass to Loftus-Cheek to his right, who had ample space and time to find the back of the net.

00:48 IST: 60th minute -- Loftus-Cheek makes a run down the right-flank into the box, tried chipping the ball past the keeper but the ball is palmed away by Courtois.

00:39 IST: GOOAALLL!! Januzaj gets the ball, cuts in the box from the right flank, beats Rose and curls the ball in the top-left corner of Pickford's goal. This is sheer brilliance from Januzaj. Beautiful, beautiful goal. England 0-1 Belgium.

00:35 IST: 48th minute -- Rashford gets a brilliant pass by Vardy. Rashford enters the box, takes the shot and the ball flies miles of the target.

00:32 IST: The second half of the Group G England vs Belgium match begins. John Stones makes way for Harry Maguire.

00:15 IST: England get their fourth corner of the first-half. Alexander-Arnold curls the ball in and it is cleared away by the Belgian defence.

00:10 IST: Five minutes of play left in the first-half. Neither of the teams have proved too dangerous for each other.

00:04 IST: England get a corner. Alexander-Arnold curls the ball and is headed wide of target by Loftus-Cheek.

23:57 IST: 26th minute -- Belgium get a corner. Thorgan Hazrad curls the ball in. Fellaini receives the ball on his chest, turns and shoots but the shot is blocked by a English defender.

23:49 IST: 19th minute -- Rose after intercepting Januzaj, makes a run with the ball and is brought down by Tielemans, who is booked. England get a free-kick. Alexander-Arnold takes it and the ball is cleared away without hassle.

23:45 IST: 15th minute -- Vardy makes a run down the right flank, finds Rashord as he passes the ball down to the edge of the box, where Courtois intercepts him and takes control of the situation.

23:40 IST: Ten minutes are up -- Both teams have got chances to score but the finishing is not on point.

23:36 IST: 6th minute -- Early chance for Belgium. Tielemans, just right of centre, shoots at the goal, the dipping ball was palmed away by the England keeper Pickford.

23:32 IST: A very uncertain start by Thorgan Hazard as he plays a blind pass back down the Belgian left. Vardy lurking around, gets hold of the ball and was looking for Rashfor in the box. A low cross is kicked away by Courtois.

23:24 IST: Both teams are walking out in the middle for the pre-match rituals.

Team news for the final round of fixtures in Group G...#ENGBEL #PANTUN pic.twitter.com/c4TyOKVN0E

22:35 IST: The starting XI for England and Belgium have been announced. Captain Harry Kane not part of the starting line up.

The final two matches of the group stage are soon upon us...

22:30 IST: Hello and welcome to the live blog of the match between England and Belgium

Against Panama, Kane went on to score a hat-trick as England scored six. But again, they conceded a goal, the first for debutants Panama. So while both the sides look good in attack, there are gaps in the defence, which could be exploited, be it on Thursday or later in the knockout stages. Both teams would like to iron out these glitches before they get into the really serious business against much stronger sides.

Belgium 2018 FIFA World Cup Football England vs Belgium, Match 48 Live Blogs
Get the latest Cricket news, check out the India cricket schedule, Cricket live score . Like us on Facebook or follow us on Twitter for more sports updates. You can also download the NDTV Cricket app for Android or iOS.