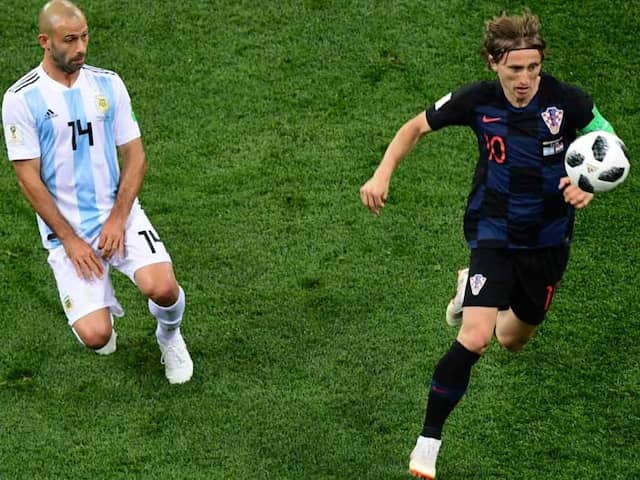 A perfectly orchestrated Croatian side netted thrice to see off a below-par Argentina in a Group D match at the Nizhny Novgorod Stadium after a spectacular first-half that remained goalless. Croatia did not let go off the ball after the break as they kept building pressure on their opposition with multiple attacks. Unlike the first-half, Argentina did not get many chances to convert but Croatia, on the other hand, converted their chances, that too in style. Ante Rebic gave his team the lead in the 53rd minute after which the the match sped up with Argentina trying to equalise desperately. However, a glimpse of magic from Croatia captain Luka Modric in the 80th minute sealed the deal for his team with a stunning strike from outside of the box. Ivan Rakitic wrapped up the win for Croatia with a sweet finish in the additional time after the stipulated ninety minutes ended. (Highlights: Argentina vs Croatia)

Argentina slowly lost the control of the match as Croatia edged closer to a big win. In the second-half, Meza of Argentina came close to finding the back of the Croatian goal but Vida blocked it effectively. Croatia have now qualified to the Round of 16 with six points while Iceland and Argentina are placed second with a point each.

We sorted out a new wallpaper for your phone #WorldCup pic.twitter.com/snhBzFSGj9

Simply incredible from #CRO as they seal their place in the knock-out stages with a historic victory!

01:19 IST: 90 min + 1 -- GOOAAALLL !! Croatia are finishing things off in style at the Nizhny Nivgirid Stadium. Croatia on the counter; Rakitic blazes down the middle, his shot is blocked by Caballero. Kovacic, who was near, passes the ball back to Rakitic, who puts the ball past the Argentinian line of defence.

01:12 IST: 85th minute -- Croatia get a free-kick. Rakitic takes the shot and the ball hits the top right corner of the crossbar. That was very, very close. Surely, it would've been 3-0.

01:10 IST: GOOAAALLL !! Luka Modric's stunning strike from outside of the box extends Croatia's lead. Modric picks up possession 25 yards out, confuses Otamendi with a bit of dribble and then curls an unstoppable shot past the Argentinian keeper. Absolutely Breathtaking!

01:00 IST: 70 minutes are up -- Argentina are desperately looking for an equaliser.

23 matches so far at this #WorldCup and, so far, we've had at least one goal in every game. Cool. #ARGCRO pic.twitter.com/BpA5Umohko

00:56 IST: Croatia fails to extend their lead in the 66th minute. Rakitic scoops a pass wide right for Vrsaljko, who slips a ball inside for Mandzukic, who, in turn, finds the wrong side of the net as he tries to ease the ball past the keeper.

00:52 IST: Messi comes close to score for his team but the Croatian keeper Danijel Subasic makes a good save to deny the equaliser in the 63rd minute.

00:41 IST: GOOAAALLL!!! Rebic gives Croatia a 1-0 lead in the 53rd minute. Willy Caballero messes up a simple back pass as he chips the ball back to Rebic, who takes his time and buries the ball into the top right corner of the Argentinian post with a magnificent volley.

00:38 IST: 52nd minute -- Aguero comes close to find the net but the Croatian keeper stops the ball with ease.

00:12 IST: Perisic delivers a cross from the right flank, Rebic reaches out to collect the ball but in the process the referee blows his whistle in Argentina's favour for a free-kick.

00:02 IST: 32nd minute -- Unmarked Mandzukic fails to find the back of the net off a beautiful Vrsaljko cross. Argentina were oblivious of his whereabouts.

23:59 IST: 29th minute -- Enzo Perez finds an empty net in front of him to net the ball but the sea of Croatian defenders forces his shot wide of the target.

23:56 IST: Aguero makes beautiful run down the left flank in the box, crosses but Ivan Strinic heads the ball away. Argentina get a corner. Maximiliano Meza takes the corner but with no effect.

23:55 IST: 25 minutes are up | Argentina are enjoying possession while Croatia are dominating the game.

23:50 IST: The Argentinian defence is falling apart at the moment. Caballero passes the ball to Tagliafico and Mandzukic was lurking around. The Croatian spots the lack of pace on the ball and collides with Tagliafico in search of a goal. The referee blows the whistle in Argentina's favour.

23:45 IST: 15 minutes are up -- Croatia are still dominating the speed of the game while Argentina are enjoying possession.

23:43 IST: Argentina is begging to grow in the middle as they ease past the opposition defence with ease two times.

23:40 IST: 10th minute -- Sime Vrsaljko receives the long ball from Rakitic and passes on in the D, but the Argentinian defence clears the ball away. Croatia have pierced Argentina two time in the first ten minutes with ease.

23:35 IST: 4th minute -- Ivan Perisic catches the Argentina defence sleeping as he makes the run down the left flank, takes the shot and Caballero palms it away for a corner. That was close, close chance.

23:33 IST: Three minutes into the game and Croatia have failed to get the ball out of their half.

23:30 IST: The Argentina vs Croatia Group D match is underway at the Nizhny Novgorod Stadium.

Two of the biggest players in the world on the same pitch tonight...

23:27 IST: National anthems done and players are waiting for the kick-off.

23:20 IST: Argentina and Croatia are walking out to the middle for their respective national anthems.

23:00 IST: Statistics -- Argentina have played five World Cup games on 21 June in the past and have won four and drawn one. Can they continue this record?

22:40 IST: Here is how the starting XI and player formation of Argentina and Croatia look.

This promises to be a good one in Nizhny Novgorod... #WorldCup pic.twitter.com/4MuxZz1NEW

22:25 IST: Hello and welcome to the live blog of the match between Argentina and Croatia straight from Nizhny Novgorod stadium.

Defender Cristian Ansaldi meanwhile insisted Messi was in good spirits despite the Iceland setback. Despite the solitary point against Iceland, Argentina can take solace from a performance which saw them muster 26 shots and have 72 per cent possession against Iceland. Sampaoli is reportedly considering several changes for the game, including drafting in young forward Cristian Pavon for Angel Di Maria for more creativity up front.

Croatia 2018 FIFA World Cup Football Argentina vs Croatia, Match 23 Live Blogs
Get the latest updates on IPL 2020, check out the IPL Schedule for 2020 and Indian Premier League (IPL) Cricket live score . Like us on Facebook or follow us on Twitter for more sports updates. You can also download the NDTV Cricket app for Android or iOS.