Wrestler Geeta Phogat is hoping to compete in the Tokyo Olympics next year. 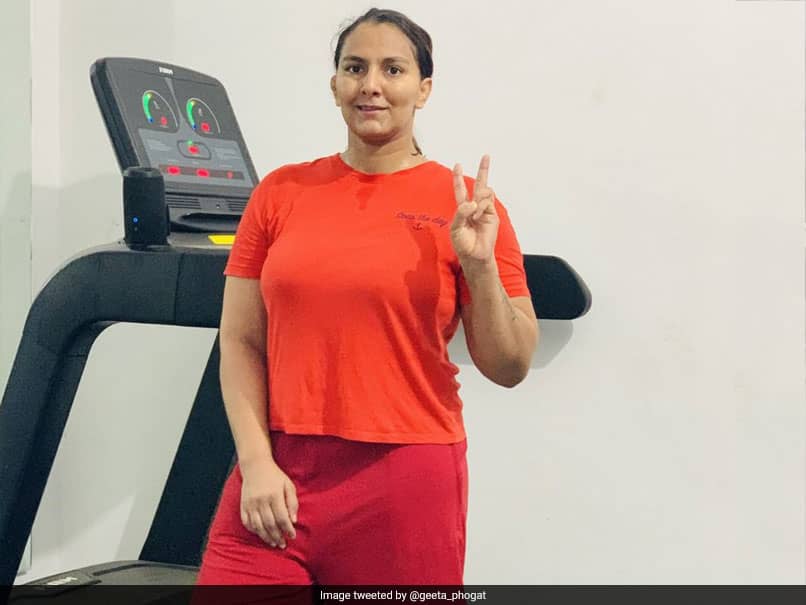 Geeta Phogat was the first Indian woman wrestler to win gold at Commonwealth Games in 2010.© Twitter

Veteran Indian wrestler Geeta Phogat has expressed desire to make a comeback and represent the country at the Tokyo Olympics slated to be held next year. In March, for the first time in the history of the mega global event, the Olympics were postponed by a year due to the coronavirus pandemic. The 31-year-old wrestler said the postponement of the showpiece came as a blessing in disguise for her as she now has more time to prepare for the Tokyo Games.

"Since the Olympics has been postponed, I'm hoping to compete in it. This one year will give me sufficient time to prepare for the trials and the qualification events," said Geeta during paddler Mudit Dani's online chat show ''In The Sportlight''.

"I have gained some weight during pregnancy, so my priority would be to get fit. And after that, whatever qualifying tournament is there, I will participate and try to book a place for the Olympics," she added.

Geeta, who became the first Indian woman wrestler to win gold at Commonwealth Games in 2010 said it was difficult to work out initially after pregnancy but she's getting the momentum gradually.

"I started fitness training sometime back but the doctor advised me to wait as I have to feed my kid. We wrestlers are not used to doing light workouts. But since the last couple of months, I have started getting into the groove. Training is difficult without an opponent so I'm doing whatever exercises are possible at home," the wrestler said.

Away from mat since pregnancy, the 31-year-old Geeta is aware that she has to work hard for the comeback due to healthy competition in the Indian camp. However, she's happy with the progress Indian wrestling has made in the last few years.

"Lot of things have changed performance-wise for India in the last four to five years. Four of our wrestlers including Vinesh (Phogat) have qualified for the upcoming World Championships. This indicates how our wrestlers are prepared for the Olympics," said Geeta, who was the first woman wrestler to qualify for the Olympics in 2012 held in London.

"Winning medals at the World Championship is very challenging and if we can repeat the feat as we did in 2019 then we will be strong contenders for the medal at Olympics", she added.