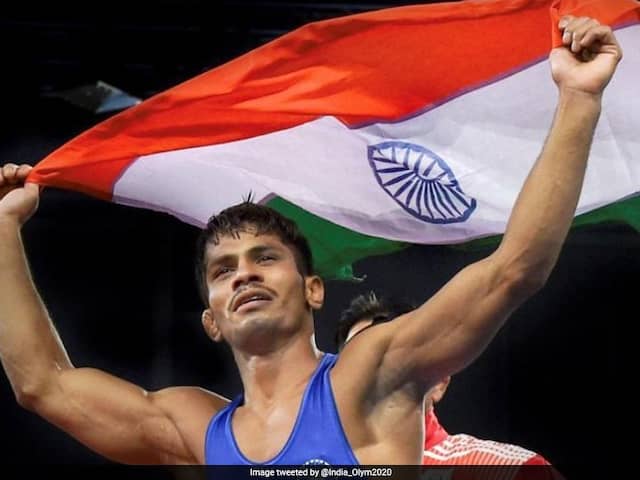 Rahul Aware defeated Tyler Graff of USA 11-4 in men's 61kg World Wrestling Championships bronze medal bout in Nur Sultan on Sunday. Rahul Aware was trailing 0-2 early in the bout but came back strongly to turn things around. At the first break, Rahul took a two-point lead over Graff and in the last three minutes of the bout, Rahul extended his lead by picking up seven points in one move to ensure India of another medal in the prestigious tournament. After Rahul's bronze medal, India's tally at World Wrestling Championships has now gone to five, country's best performance in the tournament.

India's previous best show was in 2013, when the country had three in their kitty courtesy Amir Dahiya (silver), Bajrang Punia (bronze) and Sandeep Tulsi Yadav (bronze in Greco-Roman).

Aware was in complete control of the bout and jumped in joy at the end, having won the biggest medal of his career. The Maharashtra grappler had won a gold at the 2018 Commonwealth Games and two bronze at the Asian Championships (2009, 2011).

The American surprised Aware with a double leg attack, the moment the bout started and earned two points with a takedown.

However, he became alert and twice wriggled out of Graff's single leg attacks. He also scored consecutive takedown points to lead 4-2 at the break.

In the second period too, Graff got hold of Aware's right leg but the Indian got himself out of trouble in an impressive manner. He then pulled the bout it away from the American with a flurry of moves - the takedowns and expose take a commanding 10-2 lead.

It consolidated further when the American lost a challenge. Eventually he won 11-4. Aware had lost a pacy semifinal 6-10 to Beka Lomtadze, the European championship silver medallist.

The morning of the final day of the championships brought with it the news that Deepak Punia will not be able to compete in Sunday's final against Iranian great Hazsan Yazdani due to an ankle injury sustained during the semifinal.

"The left foot is not taking the load. It's difficult to fight in this condition and could have aggravated the injury. I know it was a big chance to fight against Yazdani but I can't help it," Deepak told PTI.

Deepak had come out of the mat limping and a swollen right eye after his semifinal against Switzerland's Stefan Reichmuth. It was a good draw for Deepak and he exploited it to get the biggest medal of his career.

In a dream run, Deepak reached the final with wins over Reichmuth, Colombia's Carlos Arturo Mendez and Kazakhstan's Adilet Davlumbayev.

He became only the fifth Indian ever to reach the World Championships after Bishamber Singh (1967) Sushil Kumar (2010), Amit Dahiya (2013) and Bajarang Punia (2018). Only last year he had won the junior world champion. Sushil Kumar remains India's only World Champion. He had won a gold in 2010 in Moscow.