It was the first good result for Sakshi Malik following the horrendous run, which began after the high of Rio Olympics. 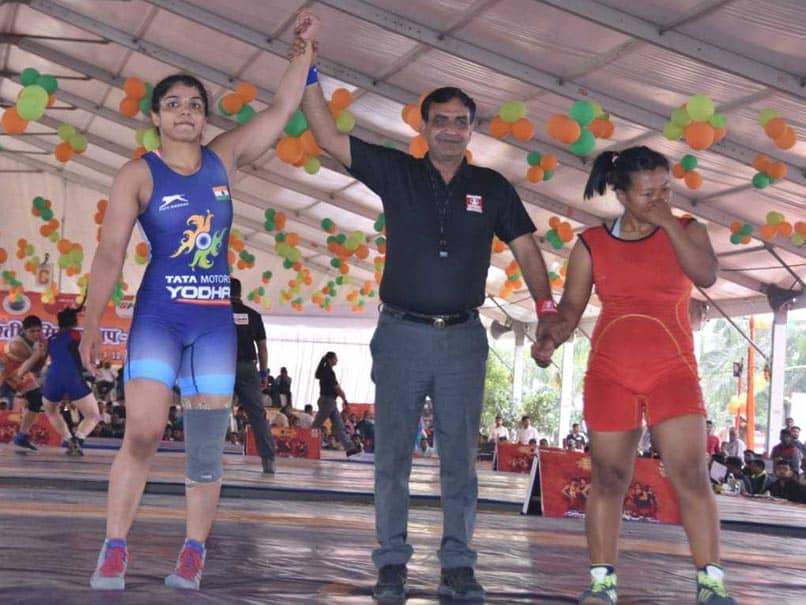 Vinesh Phogat capped a highly successful season by grabbing the 57kg national title while Sakshi Malik ended a terrible year by emerging champion in the 62kg at the Senior National Championship on Saturday. Vinesh has already stamped her class at international level by winning the Commonwealth Games and the Asian Games titles and it was just about getting some match competition under her belt after missing the Worlds due to an elbow injury. On way to her sixth National title, Vinesh conceded just two points in five bouts. She had earlier won five Nationals in a row from 2012 to 2016 in different categories.

Vinesh, who competed in the 50kg, had prepared herself for the higher weight category with intense sessions against heavier sparring partners on Friday evening.

"I could compete as I wanted. I wanted some competitive matches before the next season. Also I felt no pain in the entire campaign, that's a big gain personally since I was competing in a higher category," said Vinesh, who had suffered a ligament and muscle tear in her elbow before the Budapest Worlds.

"I started practicing only 15 days back, so my rehabilitation has worked nicely."

Vinesh won with ease but said the standard was not that bad during the competition.

"The first girl (Neetu) was very powerful and I lost two points due to my mistake. Two other girls were good but I am more experienced than them and that definitely helped. The more they train with seniors at the camp, the better they will get."

She began with a 13-2 win over Chandigarh's Neetu. The score looked convincing but Neetu fought her heart out in the opening round. Next up for Vinesh was Sweta Balagatti but the Karnataka athlete was no match to the Haryana wrestler, who ended the bout in two minutes with a pin after leading 8-0.

In the quarterfinals, Haryana's Manisha initially put up a fight against Vinesh but the star Indian grappler proved too powerful for her rival. After leading 6-0 following the first period with two take-down points, Vinesh applied a superb four-point throw to end the bout on technical superiority.

In the semifinal, Vinesh showed her class, applying a sensational four-point throw to stun Ravita from Haryana B. The bout was over in just 76 seconds.

The final against Babita was only the second bout, which required a second period. Vinesh secured the title by taking the score to 10-0, with more than two-and-a-half minutes left.    Sakshi, on the other hand, did a world of good to her confidence by winning the title in the 62kg without losing a single point.

It was the first good result for Sakshi following the horrendous run, which began after the high of Rio Olympics.

Out of five bouts, she got a walkover in the first round while the final bout ended in just 25 seconds as Anita conceded due to a left knee injury.

Sakshi began with a walkover from fellow Railways grappler Apoorva and then overwhelmed UP's Pooja Tomar, winning by technical superiority.

The dominance continued with Sakshi outclassing Manipur's A Luwang Khombi in just 43 seconds. The Olympic medallist maintained the winning run by outwitting Haryana's Poona 11-0 to secure her place in the summit clash.

"This is not something big but I will take it. There was not much competition because most of the rivals were junior but any competition is good. I am more focused on next season and will start with Asian Championship," said Sakshi.

Ritu Malik, who had a fairly good run this year, could not even make it to the final in the 65kg, losing a close semifinal to the very impressive Anita, the 2010 CWG gold medallist. She settled for a bronze after holding off Reshma of Maharashtra.

Ritu began her campaign in the 65kg with a dominating win over Madhya Pradesh's Maya Yadav. The Railways grappler, who had reached the bronze medal round at the World Championship in the same category, pinned her opponent in a matter of seconds. The next rival - G Rohini - also met the same fate as Ritu moved to quarterfinals.

However, she lost the thrilling semifinal to Anita, who went on to win the gold medal after prevailing 4-0 against Geetika Jakhar in the battle of veterans.