India continued their winning run at the U-23 World Wrestling Championship to create history by winning two more bronze medals in the Greco-Roman category, taking their tally to a record three medals 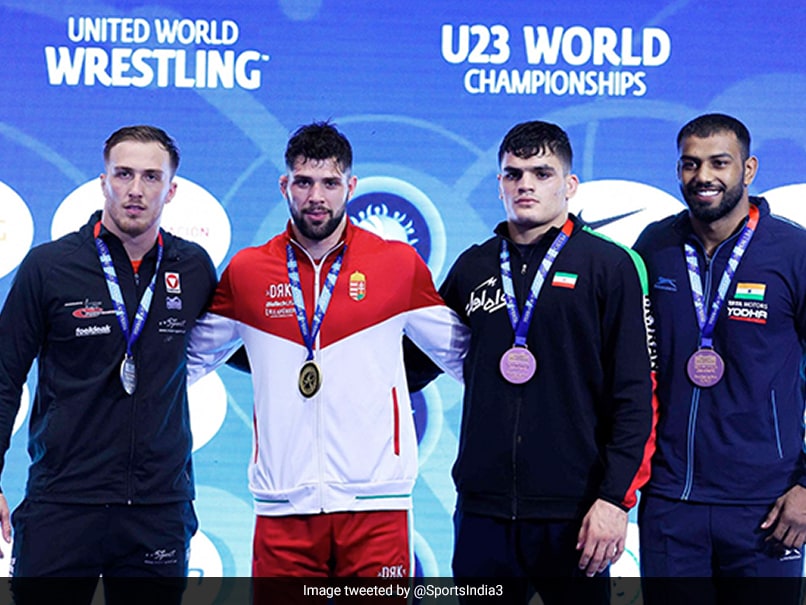 India continued their winning run at the U-23 World Wrestling Championship to create history by winning two more bronze medals in the Greco-Roman category, taking their tally to a record three medals on Wednesday. Nitesh won the 97 kg Bronze by defeating Brazillian Igor Fernando Alves De Queirozin in the Under-23 Senior World Wrestling Championship in Spain. The Indian wrestler completely dominated the Brazil wrestler and won 10-0 giving India its third medal.

Vikas defeated Daigo Kobayashi of Japan in the 72 kg bronze medal match to take home the Bronze. The ace wrestler won 6-0, a victory by points to give India its second medal.

The Indian squad scripted history after winning three medals for the first time in the Greco-Roman style at the Under-23 World Wrestling Championship.

Earlier Sajan won India's first Greco-Roman medal in U-23 Wrestling World Championship. The wrestler got the better of Ukraine's Dmytro Vasetskyi in the repechage round to win the historic medal. The Indian secured a 10-10 victory by points over his Ukrainian counterpart.

After securing a 3-0 win in the first round against Lithuanian Aistis Liaugminas, the athlete lost to Moldova's Alexandrin Gutu in the pre-quarters 0-8.

However, Sajan got shy at the bronze medal via the repechage system after Gutu made it into the finals of the 77 kg round. The ace athlete grabbed the opportunity with both hands to create history for India.

India suffered a major blow in the U-23 World Wrestling Championships after 21 members of the 30-member squad were denied visas to Spain by the Spanish embassy.

According to reports in the media, the reason for the denial of the visa is due to the intentions of the players to leave the territory before the expiry of the visa.

The Wrestling Federation of India (WFI) had picked a 30-member squad for the World Championship but only nine were granted after the embassy of Spain denied visas to 21 of the wrestlers.

Wrestling Federation of India (WFI) chairman Brijbhushan Sharan Singh termed the denial of visas to 21 members of the 30-strong Indian squad for the U-23 World Wrestling Championships by the Spanish Embassy as highly unfortunate.

"This has happened for the very first time. When a tournament is assigned to a country, there is a condition that they would not stop players from any country from coming, not even players from countries with which they have strained relations," told the chairman to ANI.

"It is highly unfortunate that it has happened. Asian Championships happened two years back and back then we had highly tensed relations with Pakistan. Despite that, we gave visas, hotel and security to Pakistan players and dropped them safely at the Wagah border after the tournament," he added.

Brijbhushan pointed out that nine out of 30 players have got their visas and the ones who have been denied a visa have supporting documents from the government and the organisers of the championships.