Tokyo Games: Wrestler Seema Bisla has qualified for the Olympics, when she won the 50kg quota last week in Sofia. 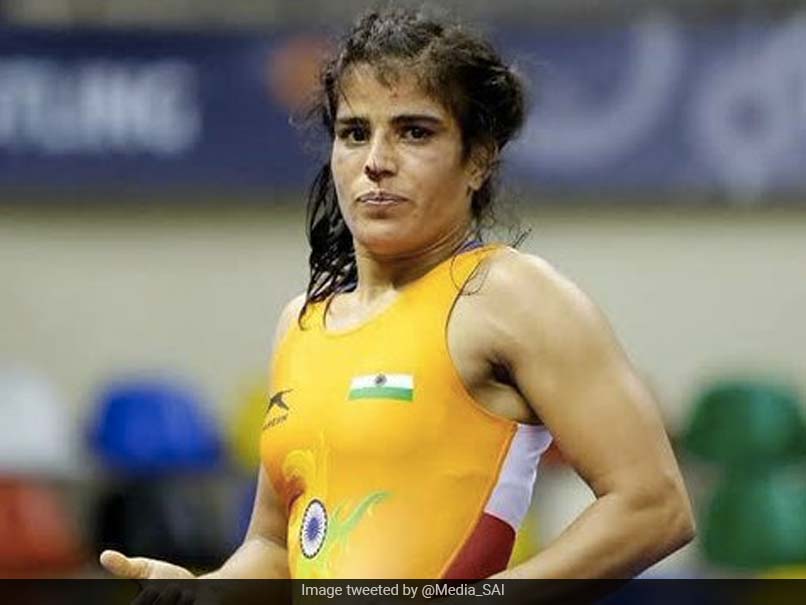 Tokyo Games: Seema Bisla after registering her berth for the upcoming Olympics.© Twitter

Qualifying for the Tokyo Olympics was an unimaginable dream realised for Seema Bisla, who did not even think of winning a national title until she bumped into a "guru" who believed in her talent more than anyone else. Disheartened and dejected at her repeated failures and lack of support from coaches, all Seema wanted was a job that would help her sustain in a tough sport. Competing at the Olympics never crossed her mind. Daughter of a cancer-stricken farmer father, she did not want to be a burden on the family.

With the help of Paramjeet Yadav she appeared in trials for a sports vacancy in the Indian Railways and landed a clerk's job in 2017. Little did she know that a casual help taken from Paramjeet would change her life and goals forever.

She expressed her desire to train under him after getting the job and shifted base to his academy, first in Gurugram and then in Farrukh Nagar. Now she is only the fourth Indian woman to have made the cut for the Tokyo Games. She won the 50kg quota last week at the World Qualifiers in Sofia.

Someone who had not even won a national title till 2017, earning the right to compete at the biggest stage was even beyond dreams. Paramjeet, himself a former wrestler, says that despite having fire in her belly, a decent technique and a big heart for fight, Seema did not have enough strength in her body.

"It's the body with which you make moves. Your mind only strategises but execution has to be done by the body. She had everything but not strength. Lack of proper diet was the reason behind it," Paramjeet said.

"She would just take milk and home made food. How she would have competed with stronger rivals. She came from a humble family, which could not afford the required, yet expensive, diet for this sport.

"Now that she had a job to support her, I suggested adding supplements, dry-fruits and multi-vitamins to her diet and her game started to change," he shared.

Seema, 27, says it was the first time in her career that someone was taking interest in her game. She was dying to get some attention and guidance but got nothing when she trained at Chhotu Ram stadium in Rohtak.

"I wanted the coaches to train me hard like they did with other girls but my sessions would not last more than a few minutes. Most of my training was outside the mat. I would get irritated, lose focus easily but no one paid attention to me. I don't know why.

"You can't do anything if you do not have support of an able 'guru' (coach). And I found mine in Paramjeet sir. Diet is something which is basic but no one told me what I needed to do.

"The day when I had to take the mat for Olympic qualification in Sofia, sir called me that morning and said I just needed to execute what I do in practice and the quota is mine. He has so much confidence in my ability that it surprises me. And each time he has been proved right," she said.

The turning point came Seema wrestled with Divya Kakran in a Mat-Dangal in 2017 and despite being severely underweight (Seema was 55kg and Divya 70kg) and under-skilled, she forced her experienced rival to use all her might to prevail against her. When Seema sent the clip of that bout to Paramjeet, she had something "strange" to hear from her coach.

"Coach sir told me that I will win the nationals with ease. I did not believe him. I thought he has gone crazy. But I actually won the title in Indore with ease and we have not looked back after that," she said.

Paramjeet says what struck him about Seema in that bout was that she had no fear in her eyes. Divya was already an established name in Indian wrestling but Seema did not care for reputation. Seema also revealed that she had almost given up when WFI held trials in February for Asian Qualifiers but Paramjeet lifted her spirit.

"I could have lost the first round when I injured my left foot. I was not able to move. But sir told me, no wrestler in this world is 100 per cent fit. He asked me apply ice pack and get ready."

"She needs to work more on technique. If she can repeat her performance of Yasar Dogu (Istanbul) and Sassari (Italy), winning an Olympic medal is no big deal," said the 42-year-old coach. Seema, who has five international medals, does not have a contract with the WFI and is without any sponsorship deal but would not mind one now so that her coach is by her side when she competes at the biggest stage.

Comments
Topics mentioned in this article
Wrestling
Get the latest updates on India vs South Africa and check out  Schedule, Results and Live Score. Like us on Facebook or follow us on Twitter for more sports updates. You can also download the NDTV Cricket app for Android or iOS.