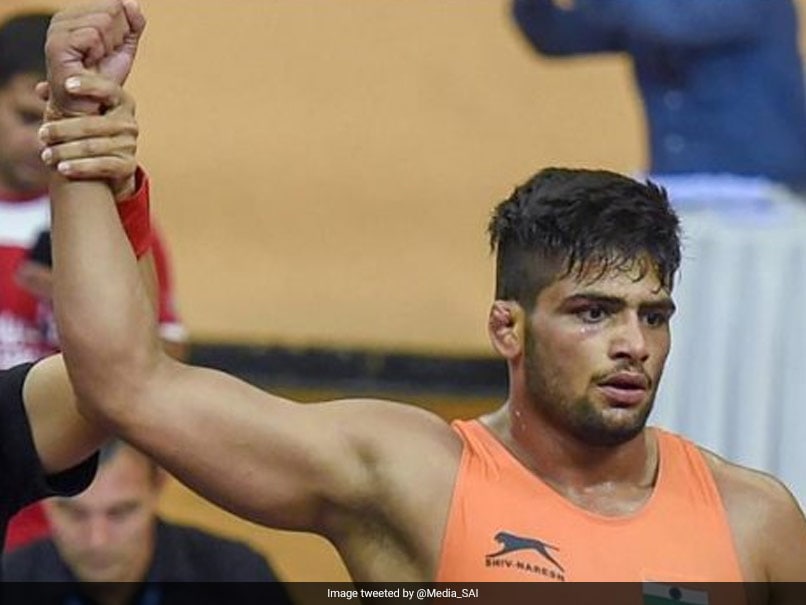 Sajan Bhanwala became the first Indian Greco Roman wrestler to win a medal at the Under-23 World Championship when he edged past Ukraine's Dmytro Vasetskyi on 'criteria' to emerge winner in the bronze play-off, in Pontevedra, Spain. It was the Ukrainian who pulled off a four-pointer on the edge of the circle for a solid start but Bhanwala bounced back immediately with a strong move that got him into a position from where he could pin his rival. Though he could not pin his rival, it was good enough to earn four points. Bhanwala lost two more points and got into defensive mode.

For staying passive, Bhanwala put on 'Par Terre' position, something Indian wrestlers are very poor at defending and the Ukrainian pulled off another four-pointer from the ground position for a handsome 10-4 lead.

Bhanwala scored two points with a take-down move and with 35 seconds left in the bout, managed to push his rival on the back to level the scores.

The bout ended at 10-10 but since the Indian had scored the last point he was declared winner on criteria.

Bhanwala had begun with a 3-0 win over Lithuania's Aistis Liaugminas but lost his pre-quarterfinal bout to Moldova's Alexandrin Gutu.

As Gutu made the final, Bhanwala bounced back into medal contention via the repechage route and he made full use of that with a 9-6 win over Kazakhstan's Rassul Zhunis.

Meanwhile, Vikas will fight for a bronze in the 72kg after losing his semifinal by technical superiority to Croatia's Pavel Puklavec. He will be up against the winner of repechage contest between Georgios Theodoros Sotiriadis and Jpana's Daigo Kobayashi.

In the 60kg category, Sumit got back to medal reckoning when he made the repechage round. He will be up agianst Kazakhastan's Olzhas Sultan.

In the 67kg competition, Ashu had bowed out after losing his qualfication bout by technical superiority to Georgia's Diego Chkhikvadze.

Six Greco Roman wrestlers travelled to the Spanish city for the championship along with two women and one free style wrestler while visas of 21 other Indians were rejected by the Embassy of Spain.