Haryana Hammers' Sun Yanan and Roublejit Rangi won the last two bouts against UP Dangal to win the last league encounter of the on Tuesday. 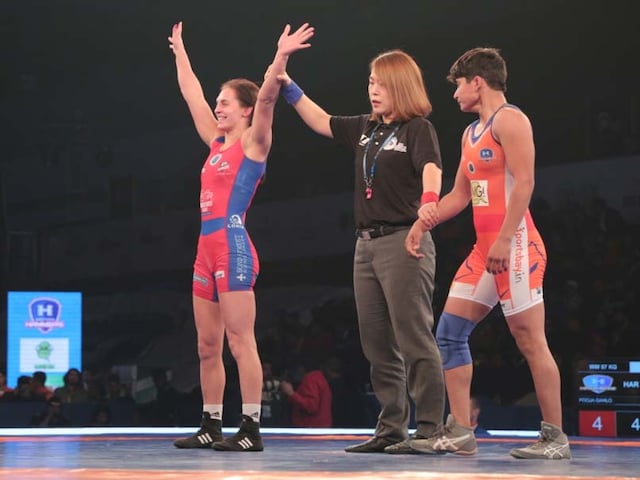 Haryana Hammers' Sun Yanan and Roublejit Rangi won the last two bouts against UP Dangal to win the last league encounter of the Pro Wrestling League on Tuesday. Their victories handed the Hammers' second position in the points table and, ironically, a semifinal clash against the same opponents. Veer Marathas will take on Punjab Royals in the other semifinal. Down 2-3 after five bouts, the Hammers needed to win their last two matches and Sun Yanan and Roublejit Rangi did so in style. Olympic bronze medallist Sun Yanan set the ball rolling by beating Vinesh Phogat 15-7, denying the Indian the pleasure of avenging her Rio Olympic debacle.

Vinesh got off to a good start, even leading Sun Yanan 3-0 in the initial minutes of the 50kg clash. However, the Chinese was up to the task and bounced back with a gritty display and took the tie to the decider as she overcame the initial deficit with a sweeping 15-7 win.

Dangal's Vicky Chahar too started off confidently and led Roublejit 2-0 at the break. The Hammers' grappler, however, recovered from it and used his experience to seal the clash 9-4 and win the tie for his side.

Earlier, Haryana Hammers won the toss and chose to block the burly Jamaladdin Magomedov while the Dangals opted to keep Sarita Mor (62kg) out of action.

In the first clash of the night, the men's 57-kg category, UP Dangal's Nitin Rathi lost 2-6 to the 2016 Olympic gold medalist Vladimir Khinchegashvili.

Rathi grabbed the early initiative, taking the lead but Vladimir used his experience to overpower Rathi and emerge victorious 6-2.

Dangal promptly bounced back to restore parity through Hungary's Zsanett Nemeth. She dominated Pooja Sihag and won 6-1 in the 76kg clash.

In an all-Indian clash in the men's 65kg category, Dangal's Bajrang Punia registered his second win of the tournament against Harphool Gulia after initially going down 0-1 on points. Punia fought back to to win 3-2.