Divya Kakran became only the second Indian woman to win a gold medal at the Asian Wrestling Championships. 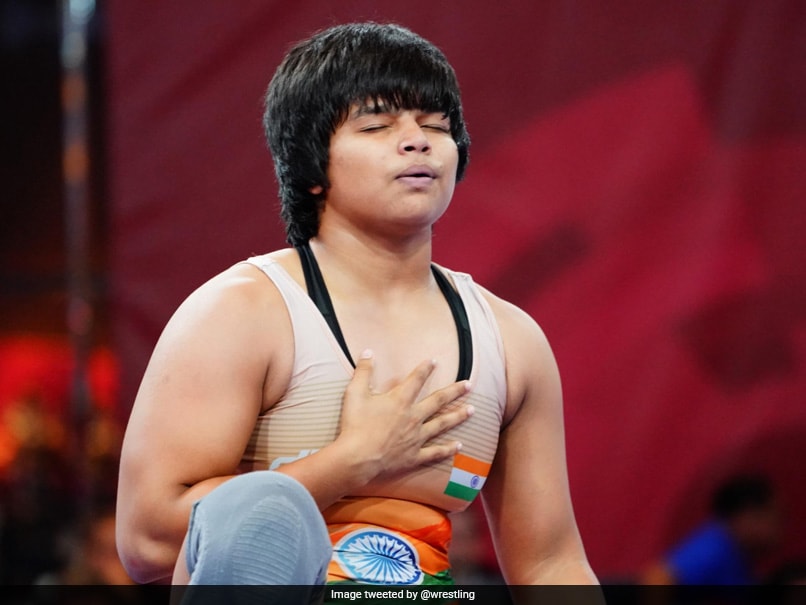 In a depleted field in the absence of Chinese wrestlers and Japan not sending its best challengers, the Asian Games bronze medallist Divya began by routing Kazakhstan's Albina Kairgelinova and then knocked out Mongolia's Delgermaa Enkkhsaikhan. Her defence looked a bit shaky against the Mongolian but she still managed to pin her rival.

In the third round, Divya was up against Uzbekistan's Azoda Esbergenova.

She went up 4-0 with brilliant consecutive rolls and then pinned her opponent to finish it off in just 27 seconds. Against the Japanese junior world champion, with her strong left-leg attacks, Divya led 4-0 with a take down and an expose move.

The Japanese made a solid start in the second period as she attacked the Indian's left leg initially but scored points with a right leg move to make it 4-4. The Japanese almost pinned her but Divya wriggled out of the difficult position.

She soon effected a move which led to her victory by fall. She jumped on the mat to celebrate with her coaches before the referee officially declared her winner. "I had to win by fall to get five points from all my bouts because the Japanese was winning all her bouts by big margins, so I took risk for big wins.

My coach had said that I don't have to go for big throws all the time but I went for it." Talking about the difficult position she got herself in against Naruha, Divya said, "It did become tricky after I led 4-0. I was not in a great position (Naruha's lock) and it could have been very dangerous.

But I took risk and it paid off by God's grace. "I was told that If I get trapped, I have to play safe. I found a way to come out.That girl is good in single leg attacks and it is my weak area.

So I became more attacking," Divya, who had won a bronze at last year's Asian Championships, said. Asked if absence of Chinese wrestler helped, she replied in the affirmative. "Yes, it did benefit. But if you have a 5-wrestler group it becomes even tougher, you have fight everyone and win big.

I won 4 bouts within 2 hours. It was tough on body but good thing is I have improved on my range, I made all kinds of attacks, Irani, Kheme, single-led, double leg attacks.

I have spent hours on practicing these moves. Now I want to qualify for the Olympics and that too with a gold," she said. Sarita, competing in her first Asian event since winning a silver in 2017 in 58kg, won her first two bouts by technical superiority against Madina Bakbergenova (Kazkhstan) and Nazira MarsbekKyzy (Kyrgyzstan) before winning 10-3 against Japan's Yuumi Kon.

She will now battle it out against Mongolia's Battseteg Atlantsetseg in the 59kg final. Also in the gold medal contention is Nirmala.

She beat Mongolia's Munkhnar Byambasuren 6-4 and Uzbeskitan's Dauletbike Yakhshimuratova by technical superiority. She is now up against Japan's Miho Igarashi. Pinki also reached the 57kg final.

She began by beating Uzbekistan's Shokida Akhmedova by fall but lost the next bout against Japan's Kana Higashikawa. She led 2-0 against the Japanese but could not sustain her lead. She then won her semifinal against Marina Zuyeva 6-0.

She will wrestle with Mongolia's Dulguun Bolormaa. To miss out on the medal was Kiran, who competed in the 76kg category. She lost two of her three bouts to go out of medal contention.

Comments
Topics mentioned in this article
Wrestling
Get the latest updates on IPL Auction 2023 and check out  IPL 2023 and Live Cricket Score. Like us on Facebook or follow us on Twitter for more sports updates. You can also download the NDTV Cricket app for Android or iOS.