Bajrang Punia says competition time lost due to the coronavirus pandemic has made it more challenging for those who are yet to qualify for the postponed Tokyo Olympics. 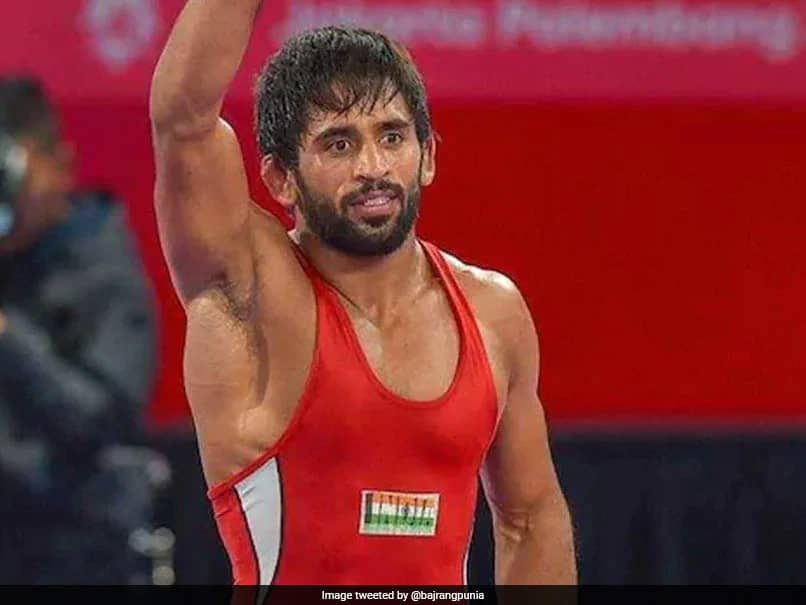 Bajrang Punia also said that he has not missed training even for a day during lockdown.© Twitter

India's ace wrestler Bajrang Punia says competition time lost due to the coronavirus pandemic has made it more challenging for those who are yet to qualify for the postponed Tokyo Olympics. Bajrang said grapplers like him, who have already sealed their tickets for the Olympics, have a clear goal and mind-set prepare for the pinnacle of the sport in the best possible manner. Bajrang, one of world's top wrestlers in the 65kg, recently started training at Inspire Institute of Sports (IIS) where his Georgian coach Shako Bentinidis has also joined him.

"I have a clear goal that I have to do well at the Olympics. It's more challenging for those who have not yet qualified. I can't say if my performance has gone down or not because there is no competition happening," Bajrang said during a webinar orgainsed by IIS on the occasion of its second anniversary.

"We have all been locked. But I have not missed training a day. Much also depends on the kind of support staff you have around you, whether they motivate you or de-motivate you. I have good people around me."

"The mind set is fixed, one-and-a-half month before a competition and the body also responds in a certain manner. When competition is there we can measure our rivals, so not having competition is definitely impacting the game," said Pooja, who has been struggling of late.

She is one of the better wrestlers in 57kg in the country but the rise of Anshu Malik from the junior ranks and competitiveness of Sarita Mor has made it a difficult category to come through.

Dhanda had no qualms in admitting it but is not overly worried.

"The 57kg category is the most competitive. All good wrestlers are there but I have competed against them. All I need is to take care of my fitness. I had four back to back injuries last year, so rehabilitation took away a bit of time performance.

"I have now World Championship (rescheduled to December) in mind, clear trials and then qualify for the Olympics. I am glad that Olympics got postponed, it gave me another shot."

Bajrang thanked his coach Shako for thinking more about him than his safety.

"I want to say a big thank you to Shako Bentinidis, who has travelled back to India despite number of cases rising in India. He has prepared a strategy for me and has suggested that I need to tweak a bit of my technique, because the rivals have seen my game."

The two wrestlers also confirmed that the national camp for Olympic weight category wrestlers will begin in Sonepat (men) and Lucknow (women) from September 1.

The camp was postponed since top wrestlers were not willing to travel due to the COVID-19 threat.

"It's good that the camp is starting. We have to learn to live with coronavirus. We will begin training with World Championship in mind," she said.

Comments
Topics mentioned in this article
Bajrang Punia Wrestling
Get the latest updates on India vs England Series, India vs England , live score and IPL 2021 Auction . Like us on Facebook or follow us on Twitter for more sports updates. You can also download the NDTV Cricket app for Android or iOS.