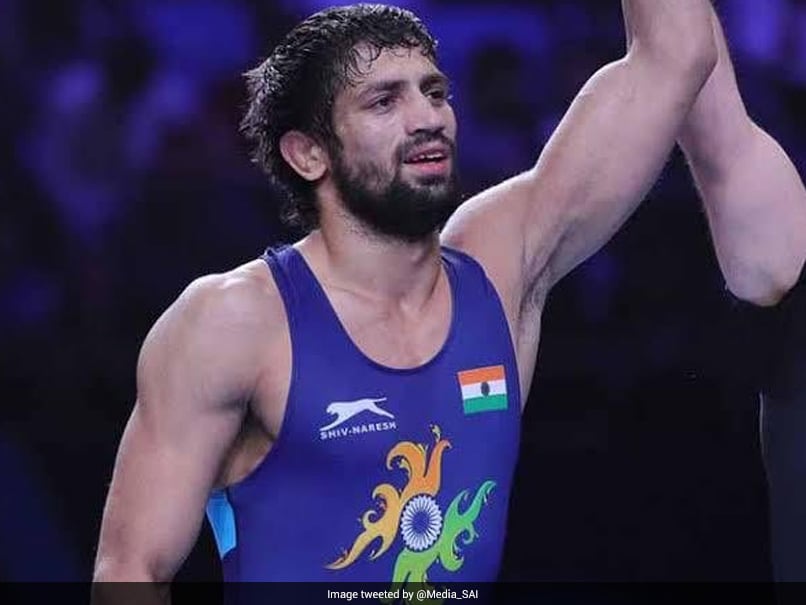 Asian Wrestling C'ship: Ravi Kumar Dahiya defeated was too good for his opponents in the 57 kg category.© Twitter

Indian wrestler Ravi Kumar Dahiya retained his Asian Championship title with a solid performance but Bajrang Punia settled for a silver medal after withdrawing from the much-awaited final against Takuto Otoguro due to an elbow injury, on Saturday. Bajrang told PTI that he did not want to aggravate the condition of his right elbow. He said he started feeling the pain during the quarterfinal against Korean Yongseok Jeong. "When I was pulling the Korean, the pain in my right elbow resurfaced. It's the same elbow that I had injured during the World Championship. The coaches advised that I must not take risk so close to the Olympics, so I withdrew," Bajrang said.

Also finishing on the podium were Narsingh Pancham Yadav (79kg), Karan (70kg) and Satywart Kadian (97kg), who won a bronze each, as all five Indians in action on Saturday returned with medals. It was Yadav's first international medal in five years as he last won it in July 2015 at the Grand Prix of Spain.

He served a four-year doping ban which he completed only recently. Yadav beat Iraq's Ahmed Mohsin Kadhim 8-2 comfortably in the bronze play off. Bajrang did not look his usual self but did not face much competition en route the final.

He had no difficulty in getting past Jeong, who hardly attacked in his opening 65kg bout. His first scoring point was a take-down on counter and earned one more for the passivity of his rival. Next for him was Mongolia's Bilguun Sarmandakh, whom he pinned to ensure his passage into the summit clash.

Bajrang had lost the 2018 World Championship title clash and last year's Asian Championship final to the Otoguro and could have tested himself against the Japanese but it turned out to be an anti-climactic end to the 65kg competition.

Ravi Dahiya, though, gave India the first freestyle gold medal of this edition with a commanding show. His supreme stamina and relentless attacking prowess was too good for his opponents in the 57kg. He returned to the mat after a year and in style.

He had last competed at this event in New Delhi where he had won gold. He was slow off the blocks but became his usual dominant self after the first period against Uzbekistan's Nodirjon Safarov in his opening bout. Once he got into his rhythm, his moves were too hot to handle for his rival, as he won 9-2.

Ravi had a lot left in his tank even towards the end while Safarov had lost his steam, making it easy for the Indian to score points. Next, he faced Palestine's Ali M M Aburumaila and won on technical superiority. His title clash against Iran's Alireza Nosratolah Sarlak was expected to be a tight one but Ravi only got better and better as the fast-paced final progressed.

There were attacks from both the wrestlers but Ravi was clearly the superior one on the mat with his quick moves as he won 9-4. Karan bagged the 70kg bronze medal after winning 3-1 against Korea's Seungbong Lee. He had reached the quarters with a hard-fought 3-1 win over Iran's Amirhossein Ali Hosseini but lost the next bout 0-6 to Syrbaz Talgat from Kazakhstan.

Later he got into the medal round through the repechage route. Kadiyan moved to the 97kg quarterfinals with an easy 8-0 win over Kyrgyzstan's Arslanbek Turdubekov. He scored two points in the first period with push out while the rest were through take-down moves in the second as his rival hardly attacked.

In the quarterfinal against Uzbekistan's Mukhammadrasul Rakhimov, he played smart to win 4-1. He then faced Iran's Ali Khalil Shabanibengar and lost the semifinal by technical superiority in mere 25 seconds.

Comments
Topics mentioned in this article
Bajrang Punia Wrestling
Get the latest updates on ICC T20 Worldcup 2022, check out the Schedule and Live Score. Like us on Facebook or follow us on Twitter for more sports updates. You can also download the NDTV Cricket app for Android or iOS.