Recently retired Chinese NBA star Yao Ming is taking the fight against eating shark fins back to his homeland, where demand for the traditional delicacy is soaring despite efforts to ban their use and trade. 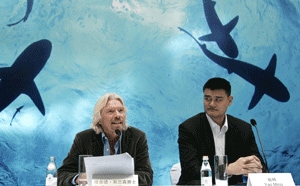 Recently retired Chinese NBA star Yao Ming is taking the fight against eating shark fins back to his homeland, where demand for the traditional delicacy is soaring despite efforts to ban their use and trade.

Yao and British tycoon Richard Branson made an appeal on Thursday in Shanghai against eating shark fins, which are a staple of high-class Chinese banquets, to a group of 30 of China's richest and most influential businesspeople.

"When demand happens, the buying happens and the killing happens," said Yao, a 7-foot-6 (2.29-meter) former center who retired in July due to injuries after eight seasons with the Houston Rockets.

Shanghai-born Yao is using his post-retirement free time to help campaign against the slaughter of 1.5 million sharks a week that is taking some of the species close to extinction.

The event, sponsored by the conservation group WildAid, is aimed at starting a conservation movement in China "not just to protect the sharks but to protect tigers, and to protect other species that are in peril of extinction," Branson said.

Critics say fishermen kill more than 70 million sharks each year for their fins, which can sell for $700 a pound (450 grams), while the soup can cost $80 a bowl. Usually, the fins are cut from the sharks and their bodies discarded, leaving them to die.

Although there have been moves to ban the trade and consumption of shark fins in California and elsewhere, 95 percent is consumed in China.

"We're trying to get other businesses to ban the transportation of shark fins," he said.

While shark fins have been used to make soup for hundreds of years, until recently consumption was limited to a small elite, said Yao, who gave up eating shark fin in 2006 and says he avoids events where it is served.

About 20 countries and regions have imposed regulations on finning or commercial shark fishing. Earlier this month, California imposed a ban on the trade. China regulates dealings in and harvesting of sharks but has not banned it.

"As far as shark finning is concerned the best way is to ... ban altogether shark fin soup from states and then countries. That's perhaps the only way to save the shark in the long term," Branson said.

Comments
Topics mentioned in this article
French Open 2011 NBA Wimbledon 2013
Get the latest updates on IPL 2020, check out the IPL Schedule for 2020 and Indian Premier League (IPL) Cricket live score . Like us on Facebook or follow us on Twitter for more sports updates. You can also download the NDTV Cricket app for Android or iOS.