After the highs of beating Roger Federer at Wimbledon, Stakhovsky was brought back down to earth after he slumped to a 6-2, 2-6, 7-5, 6-3 loss to Jurgen Melzer. 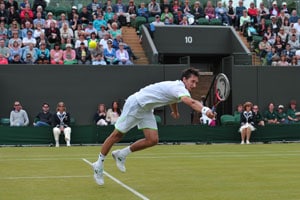 Sergiy Stakhovsky's Wimbledon fairytale came to an abrupt end as Roger Federer's conquerer slumped to a 6-2, 2-6, 7-5, 6-3 defeat against Austria's Jurgen Melzer in the third round on Friday.

Stakhovsky had caused one of the biggest upsets in the history of the All England Club when the world number 116 defeated reigning champion Federer on Centre Court on Wednesday.

It was Federer's earliest exit from a Grand Slam for a decade and ended the seven-time Wimbledon champion's incredible run of 36 successive quarter-final appearances at the majors.

But Stakhovsky, 27, was brought back down to earth just 48 hours later in the less glamourous surroundings of Court Three.

Unlike Federer, world number 37 Melzer was able to subdue Stakhovsky's serve and volley tactics and will play Spanish 15th seed Nicolas Almagro or Poland's Jerzy Janowicz for a place in the quarter-finals.

Stakhovsky might have had an inkling it wasn't going to be his day when he suffered an injury scare midway through the first set, slipping as he raced to the net and twisting his right ankle into an awkward position as he struggled to stay upright.

The slippery condition of the grass courts has been a major bone of contention this week and Grigor Dimitrov had refused to continue playing when he fell as rain came down during his defeat to Grega Zemlja on the same court earlier in the day.

The Ukrainian called for a medical timeout and had the ankle heavily strapped before continuing, but Melzer, already a break up, easily closed out the set.

Stakhovsky had out-played Federer by attacking the Swiss great with a retro game-plan rarely seen in this era of baseline dominance.

Stakhovsky, bidding to make the fourth round of a Grand Slam for the first time, kept coming to the net and levelled the match as he broke twice to take the second set.

He broke again for a 4-2 lead in the third set, but suddenly lost his rhythm and Melzer hit back in ruthless fashion, breaking twice to move within one set of victory.

Stakhovsky failed to convert three break points in the second game of the fourth set and that proved the end of his memorable week as Melzer made him pay with a break in the next game to seal the win.