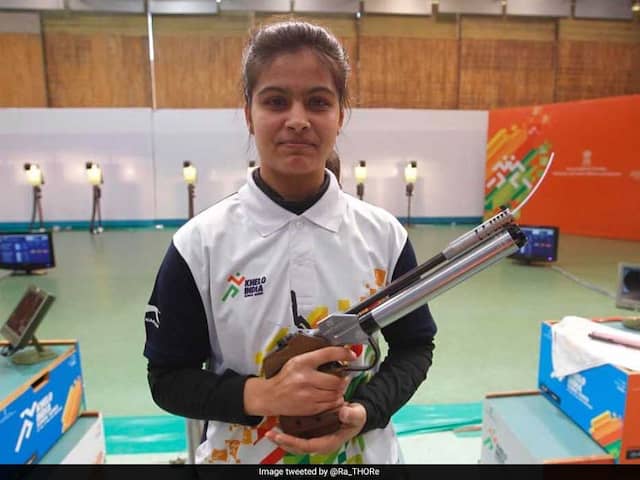 India's next generation of athletes scripted history not once but twice in the space of 24 hours as weightlifter Jeremy Lalrinnunga and shooter Manu Bhaker picked up the country's maiden set of gold medals in the Youth Olympics here on Tuesday. The 15-year-old Lalrinnunga shattered the national record in the men's 62kg category to claim the top honours and announce his arrival at the big stage. Bhaker, on the other hand, rediscovered the form that made her a sensation in the women's 10m air pistol event.

Lalrinnunga, who is also a world youth silver-medallist, lifted a total of 274kg (124kg +150kg) to finish on top in the Argentine capital on Monday night, which was early Tuesday morning in India. "I am feeling really happy that I won the gold medal here," Lalrinnunga told PTI.

The 16-year-old Bhaker shot 236.5 to finish on top of the podium on Tuesday, making up for the heartbreak at the Asian Games in Indonesia and the World Championship where she could not live up to her billing.

"This is an important win for me. It will be a morale booster (after the Asian Games disappointment) as I look forward with an aim to bring home more laurels," Bhaker said after winning the gold. Mizo sensation Lalrinnunga, who will turn 16 on October 26, is the son of a former boxer, Lalneihtluanga, who has seven national-level gold medals to his credit.

Lalrinnunga was himself an aspiring boxer before he shifted to weightlifting on the advice of coaches and was picked up by the Army Sports Institute scouts in 2011 at the age of 8. Earlier this year, Lalrinnunga claimed a silver (youth) and a bronze (junior) in the Asian Championships, smashing two national records in the process.

Two 9.8 in the beginning of the second stage (elimination) were followed by a 10.1 and 9.9, helping her maintain the lead over Thailand's Kanyakorn Hirunphoem by some distance.

The World Cup and Commonwealth Games gold medallist extended her domination in the following shots and looked to be on course for the yellow metal. She slipped once to the second place but quickly regained the top position. Earlier, Bhaker topped the qualifying with 576, which included a series of 95, 96, 96, 96, 95, 98 and placed second and third in the qualification were Russia's Enina Iana and Chinese Lu Kaiman with 569, the gulf in scores clearly highlighting the form the Indian was in.

Representing the country in the women's 10m air pistol event, Bhaker has won medals at all major events she has participated barring the recent Asian Games.

While Lalrinnunga and Bhaker made the nation proud, weightlifter Sneha Soren could not finish on the podium in the women's 48kg category, signing off the fifth.

In swimming, Srihari Nataraj, who competed in the 100m backstroke final despite being a reserve, could only manage a sixth position. In other events, Archana Kamath and Manav Thakkar, India's representatives in table tennis, won their singles matches of the group stage.

Kamath beat Malaysia's Javen Choong 4-2 while Thakkar defeated Slovakia's Aleksandra Vovk 4-1.    It was a big win for India in hockey as the team thrashed Austria 9-1.

Rising badminton sensation Lakshya Sen had it tough against Danylo Bosniuk in the first game before he regained his composure to beat the Ukrainian 23-21, 21-8. India have already won four medals with Tushar Mane and Mehuli Ghosh bagging a silver each in 10m rifle shooting while Thangjam Tababi Devi won India's first medal in judo by finishing second in the 44kg category. India won just two medals -- a silver and a bronze -- in the last Youth Olympics in 2014 in Nanjing in China.

In the inaugural 2010 edition in Singapore, the nation fetched six silver and a couple of bronze medals. The country is being represented by 47 athletes at the ongoing Games, its biggest ever contingent.