Sports Authority of India on Saturday expressed concerns after it emerged that protocols are "not being adhered to" during the ISSF World Cup, with some international shooters also "venturing out" into the city, breaching the bio-bubble. 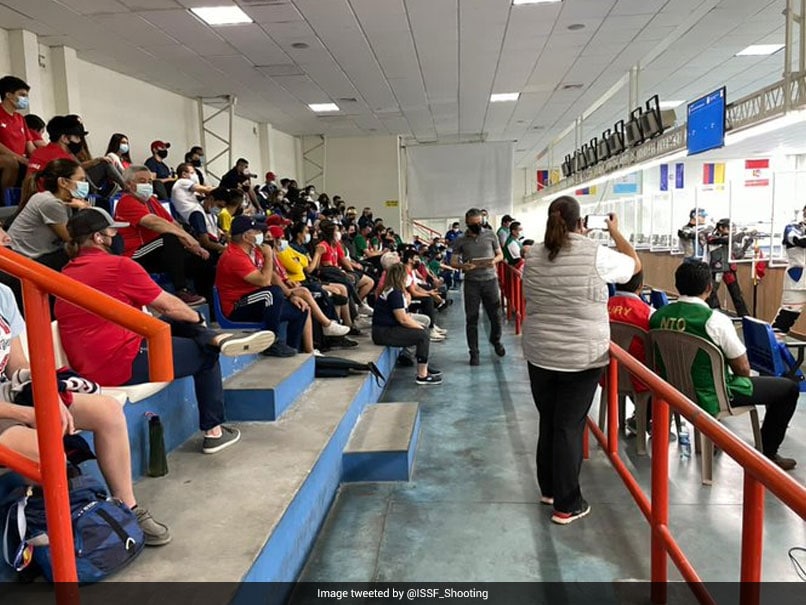 Three shooters, including two from the Indian contingent, tested positive for COVID-19 on Saturday.© Twitter

Sports Authority of India on Saturday expressed concerns after it emerged that protocols are "not being adhered to" during the ISSF World Cup, with some international shooters also "venturing out" into the city, breaching the bio-bubble. The ongoing tournament, scheduled at the Dr Karni Singh Range from March 19 to 29, was rocked after three shooters, including two from the Indian contingent, tested positive for COVID-19 earlier in the day. SAI has asked the NRAI to submit a report on the same. "Sports Authority of India has been made aware that during the ongoing Shooting World Cup in Delhi the Standard Operating Procedures are not being adhered to at the Games hotel and also some international players have ventured out to public places in the city, thereby breaching the bio bubble," SAI wrote in a statement.

"SAI has written to the National Rifle Association of India and asked the federation to submit a report on the same," the nodal sports body added in its statement.

The NRAI, shooting's governing body in the country, is also the tournament's local organising committee.

The shooters, who tested positive, are currently self-isolating in their team hotel.

Those who were sharing the rooms with the three shooters as well as their other teammates were also isolated after undergoing COVID tests.

The results of the roommates and other team members, though, have returned negative.

In all, four shooters have already been afflicted by the dreaded virus since the teams started arriving for the tournament, which started on Friday in the national capital.

On Thursday, a top international shooter returned positive for COVID-19, following which he was sent to a hospital.

The shooter was first tested at the airport and then again on Thursday. He is asymptomatic and the shooter has never visited the range.

A total of 294 shooters from as many as 53 countries, including Korea, Singapore, USA, United Kingdom, Iran, Ukraine, France, Hungary, Italy, Thailand and Turkey, are participating in the tournament.

As per the ISSF guidelines, no spectator is allowed inside the range during the tournament, which carries ranking points.

Comments
Topics mentioned in this article
Shooting
Get the latest updates on India vs South Africa and check out  Schedule, Results and Live Score. Like us on Facebook or follow us on Twitter for more sports updates. You can also download the NDTV Cricket app for Android or iOS.