From his coach's apartment, 17-year-old Divyansh Singh Panwar is keeping alive his dream of competing in the Olympics in Tokyo. 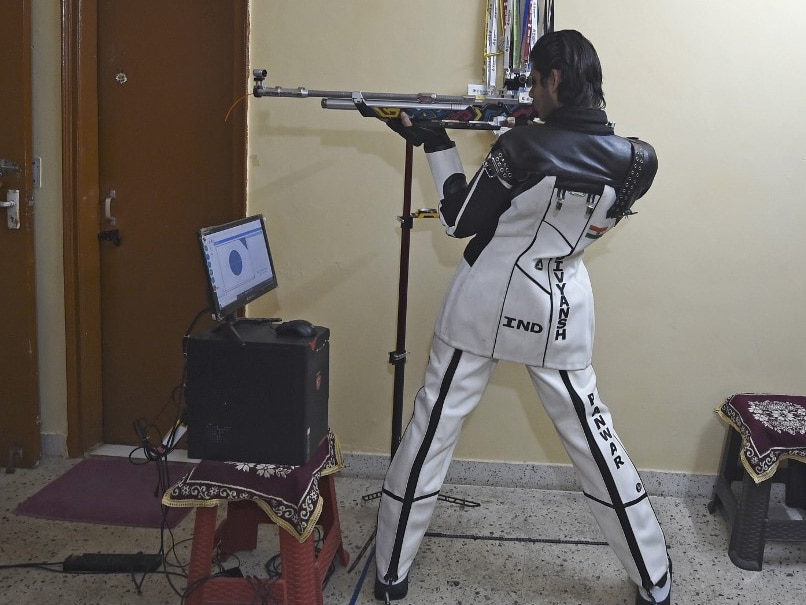 Divyansh Singh Panwar has been practicing at his coach's residence during the coronavirus lockdown.© AFP

Indian shooter Divyansh Singh Panwar stands poised behind blue tape stuck on the floor, aims and fires -- across three rooms at a target hung up in an empty bedroom cupboard. From his coach's apartment, the 17-year-old world number one in 10-metre air rifle is keeping alive his dream of competing in the next Olympics in Tokyo -- whenever they will be. "I did not let disappointment creep in when this pandemic broke out," Panwar told AFP. "I just kept my positivity thinking that Olympics will happen at a later date and I will be going for gold."

The teenager tried yoga and running up stairs to keep fit, but with his shooting range off-limits since late March, he was desperate to squeeze the trigger again.

One night his coach Deepak Kumar Dubey, while thinking of Panwar's entry into an online competition, had the brainwave of turning his sixth-floor flat in Faridabad outside New Delhi into a makeshift range.

Panwar's own three-bedroom flat was unsuitable since the rooms are not connected. And thankfully, from a safety point of view at least, Dubey's family are stranded elsewhere in India.

"I realised that we could get a 10-metre distance if I empty stuff from two of my rooms and a lobby in between to get a clear shot at the target," Dubey told AFP.

"I pasted all the yellow cards, lighting is also good, I checked with the lux meter. So no problem for training."

Panwar said: "We took permission from the local resident welfare association and told them that we are members of the Indian shooting team, and they were very cooperative and supportive."

But setting up the temporary range had its challenges with little resources at hand for the student-coach team, with all but essential shops shut.

"It was impossible to get hold of a drill machine and a hammer in the lockdown," Dubey said.

"I used a grinding stone to hammer in the nails and also moved some lights from their original position to illuminate the shooting area."

They also got help from shooting administrators to get ammunition, despite the strict lockdown.

They log in on the Zoom app from their locations with a camera behind their backs and fire at their Electronic Shooting Targets (EST), linked up to a computer.

"We came fourth in the first open (online) tournament. This proved the fact that nobody would have got close (to Divyansh's score) if we had practised at a proper range," said Dubey.

To keep him stay on course to the Japan journey, Panwar's training room has two clocks with one displaying Tokyo time and other showing local time.

Part of a strong 15-member shooting squad for the Tokyo Olympics with six golds in Asian and world meets to his name so far, Panwar's hero is compatriot Abhinav Bindra.

Bindra created history in the 2008 Beijing Olympics when he topped the podium in the 10m air rifle, giving the country its first ever individual gold in the Olympics.

"It is a tough time but it has equipped me to face any situation in the future. If I get stuck in a foreign land I can survive," said Panwar.

"We are now itching to get back to the range and get our Olympic preparations back on track," said Panwar.