Saurabh Chaudhary, earlier in the day, broke his own world record at the ISSF World Cup 2019. 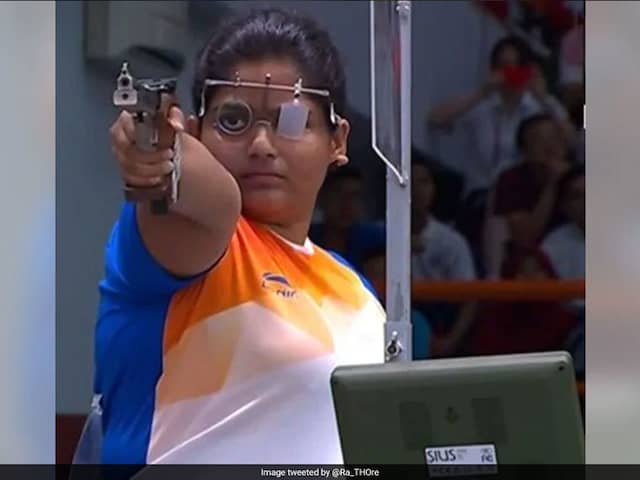 Rahi Sarnobat secured a Olympics 2020 quota with the win.© AFP

Rahi Sarnobat added the third gold in India's medals tally at the ISSF World Cup 2019 in Munich as she bagged the top podium spot in the 25 metre pistol event. By the virtue of the victory, Rahi Sarnobat has booked herself a quota in the Tokyo Olympics. In the day earlier, Saurabh Chaudhary, the 17-year-old sensation, made the country proud once again as he bagged a gold in the 10 metre Air Pistol category. The teenage broke his own world record of 245 by shooting 246.3 points in the final to take the summit standings. It was the second gold medal at the ISSF World Cup 2019 for India after Apurvi Chandela clinched it on Sunday. Chaudhary had proved his mettle at World stage earlier when he bagged a gold at the World Cup in New Delhi, earlier this year. His impressive run also includes a gold medal in Youth Olympic Games (2018) and a gold in 2018 Asian Games.

He also holds the World record in 10m Air Pistol category for both senior and junior level.

Chaudhary has also impressed in the mixed team event for India as he along with Manu Bhaker had earlier won a gold medal in the 10m Air Pistol Mixed team event at the ISSF Shooting World Cup 2019 in Beijing.

The Indian pair defeated Jiang Ranxin and Pang Wei of China by a comprehensive margin of 16-6 in the gold medal battle.

It was the second consecutive gold for Manu Bhaker and Saurabh Chaudhary at the ISSF World Cup as they had clinched a gold in the same category in the New Delhi edition of the shooting World Cup in February this year.