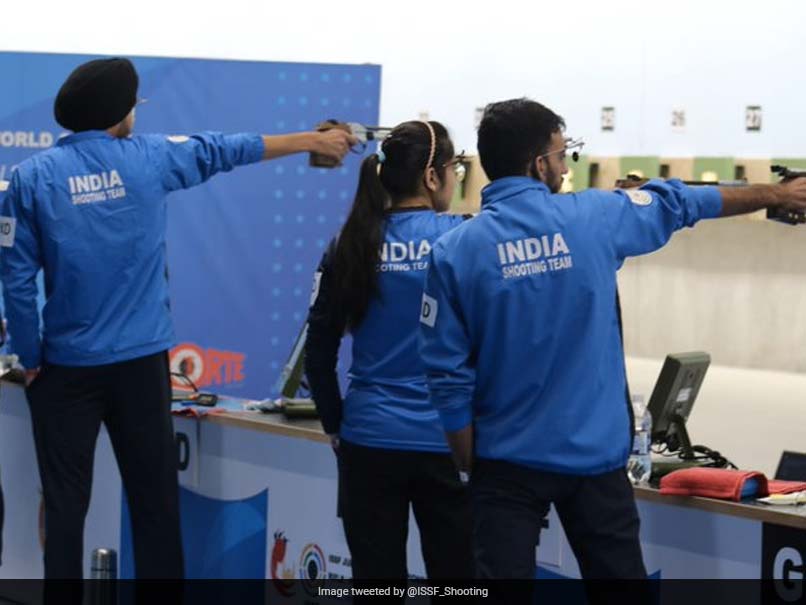 Indian shooters Anish Bhanwala, Adarsh Singh and Vijayveer Sidhu combined to win the gold medal in the men's 25m rapid fire pistol team event as the country ended the ISSF Junior World Championship on top of the standings. The Indian trio shot a total of 10 to finish ahead of their German counterparts Fabian Otto, Felix Luca Hollfoth and Tobias Gsoell (2) in the gold medal contest on Friday. India's Manvi Soni (105) bagged the junior double trap gold medal ahead of compatriot Yeshaya Hafiz Contractor (90). The bronze was won by Hitasha (76) in an event that only featured Indians.

Vinay Pratap Singh Chandrawat claimed the gold medal men's double trap event with a score of 120, while the silver went to Sehajpreet Singh (114) and the bronze to Mayank Shokeen (/111).

Ayushi and Aishwary shot 17 in the gold medal match to finish second to the 31 shot by the German pair of Max Braun and Anna Janssen. The Indian duo had topped the qualification round with a world record-equalling score of 590, with the eventual gold medallists finishing in second spot.

The other Indian team of Nischal and Sartaj Singh Tiwana finished eighth in the qualification round with a score of 574. This was after the Indian pair of Rhythm Sangwan and Vijayveer Sidhu clinched the 25m rapid fire pistol mixed team gold medal.

The country also claimed the bronze medal in this event with Tejaswani and Anish triumphing 10-8 against another Thai team in Chawisa Paduka and Ram Khamhaeng.

In the junior women's 50m Rifle 3 Positions, Prasiddhi Mahant, Nishcal and Ayushi Podder clinched the silver medal after going down to the American trio of Elizabeth McGhin, Lorraine Zaun, and Carolynn Tucker. The Indians were beaten 43-47.