The event will be held at the Dr Karni Singh Shooting Range between September 27-30, and precedes the Asian Shooting Championship -- the last event for shooters from the continent to win quota places before the quadrennial sporting extravaganza begins in less than a year from now. 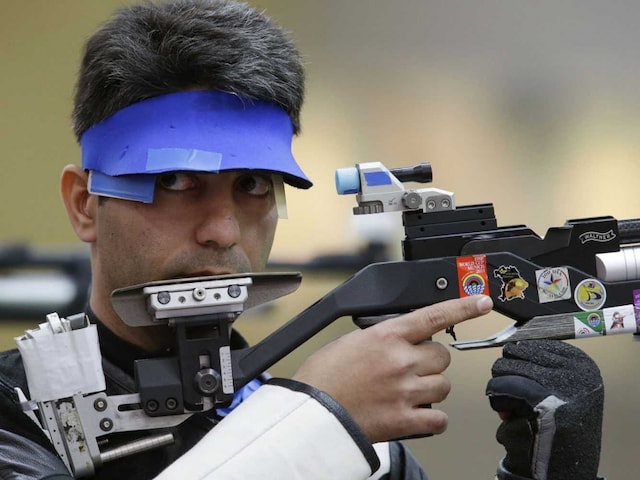 The shooting fraternity, including ace marksmen Abhinav Bindra, Jitu Rai and NRAI chief Raninder Singh, on Thursday said the 8th Asian Air Gun Championships will be an ideal preparation for the Indian shooters before they make a final push to secure Rio Olympics quotas.

The event will be held at the Dr Karni Singh Shooting Range between September 27-30, and precedes the Asian Shooting Championship -- the last event for shooters from the continent to win quota places before the quadrennial sporting extravaganza begins in less than a year from now.

The opening ceremony of the Asian Air Gun Championships will be held here on Friday.

"It will be good preparation for Rio. I'll be using this competition as preparation for future. I am training everyday. The range looks better, the lights are more constant," Bindra, India's lone individual Olympic gold medal winner, said.

National Rifle Association of India president Raninder said, "It's a great day for Indian and Asian shooting as it is the first international shooting competition here after the 2010 Commonwealth Games. India is a powerhouse in pistol and rifle shooting."

India has so far bagged eight Rio quota places. They had won 11 quota places before London 2012 and the NRAI chief said aim is to go one better is the bare minimum for Rio Games.

Raninder confirmed that a total of 180 shooters from 14 countries will be participating in the four-day competition, with hosts India fielding the largest squad of 56 shooters across the senior, youth and junior segments.

The range has undergone renovation and the shooters seemed happy.

"Everything is refurbished, whatever was needed has been provided, the federation ensured that comfort and facility is available. Technical delegate from Sri Lanka visited the range to inspect it and he was satisfied -- he was a representative of Asian Shooting Federation," said Raninder.

Like China, Pakistan, too, has pulled out of the tournament and on its absence, the NRAI chief said, "We have not received any information from them, they are not funded by the state so the resources are limited. I assume since the Asian Shooting Championship is there, which is the last Olympic quota event, they are primarily focused on that and keeping their resources."

The Chinese are not competing as their Olympic trials are on.

While Jitu Rai would like to gain experience by participating in this event, Chain Singh said, "The competition is very important, a step towards Olympic preparation, have been training for this."

Chandela said, "This is a part of my preparation for the Olympics. A couple of things have changed for me, including my rifle. I am looking forward to it. It's a matter of great pride that India is hosting this event."

While pistol shooter Shweta Singh added, "This will be an important tournament before the Asian Shooting Championships, so I will look to win a medal here, that will boost my confidence going into the last quota event."

On the issue regarding a complaint being filed against a renowned shotgun shooter by the mother of a fellow marksman, Raninder said, "The matter is again between two athletes. We have referred it to our Athletes Commission and we will be extremely careful. We have zero tolerance on these issues also."

The complainant alleged that her son, Yuvraj Kumar Mahajan, was threatened by fellow shooter Arjun Singh Rao. According to reports, she sent an email to Delhi Police Commissioner B S Bassi, NRAI president Raninder Singh and Director General Sports Authority of India (SAI) Injeti Srinivas, saying her son was threatened.

Asked about the sexual harassment issue surrounding top rifle coach Stanislav Lapidus, Raninder said, "The matter has been referred to the Athletes Commission. If a specific complaint is reported, law will take its course, we have zero tolerance in such matter.

"We usually accept what the commission finds. Until then we have to have faith in the coach. Until there is a specific complaint against an individual we will have to wait for the commission's report. In this issue, we still have no complaint."