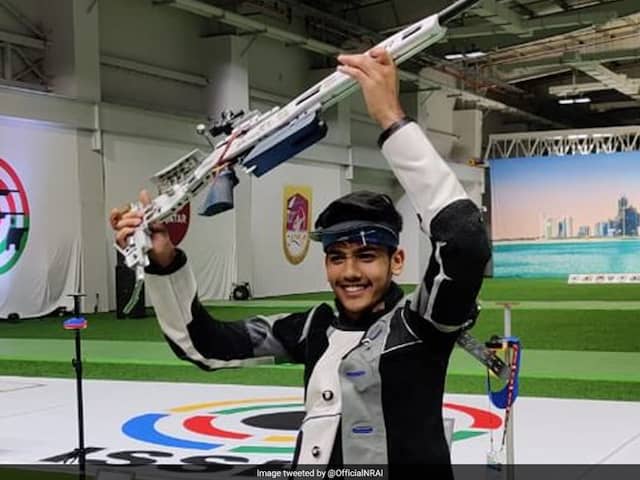 Aishwary Tomar shot 449.1 in the eight-man finals to finish third on the podium.© AFP

India bagged an unprecedented 15 Olympic quotas in shooting after Angad Vir Singh Bajwa and Mairaj Ahmad Khan's 1-2 finish in skeet and teenager Aishwary Pratap Singh Tomar's bronze at the Asian Championships in Doha, Qatar on Sunday. There was a shoot-off for the men's skeet gold medal and Bajwa prevailed 6-5 against his compatriot after both were tied on 56 at the Lusail Shooting Complex. This is India's best-ever Olympic quota haul, easily surpassing the 12 at the 2016 Rio Games and 11 in London in 2012. Earlier in the day, 18-year-old Tomar secured the country's 13th quota with a bronze in men's 50m rifle 3 positions.

Continuing India's impressive performance at the prestigious championship, the duo of Manu Bhaker and Abhishek Verma got the better of compatriots Saurabh Chaudhary and Yashaswini Singh Deswal 16-10 to win the gold medal in the 10m air pistol mixed team event.

Bhaker and Verma shot 577 and 387 in the two qualifications, while Chaudhary and Deswal managed 576 and 387.

Before India's exploits in the mixed event, Tomar shot 449.1 in the eight-man final to finish third on the podium, behind gold medallist Kim Jonghyun (459.9) of Korea and Chinese Zhonghao Zhao (459.1), at the Lusail Shooting Complex.

He had sailed through to the finals of the event with a 1168 score in the 120-shot qualifying.

There were three quotas on offer in the event. India had 11 shooters at the 2012 London Olympics and 12 in Rio de Janeiro in 2016.

In July, teenager Tomar, from Ratanpur village in Madhya Pradesh's Khargone district, had shot down the men's rifle 3 positions junior world record on his way to winning gold, helping the country top the medals tally in the ISSF Junior World Cup in Suhl, Germany.

Tomar is the second Indian, after veteran Sanjeev Rajput, to have got a quota place in the 3 position event.

He is a part of the junior team trained by Suma Shirur. Hailing from an agricultural family, it was during a camp in Bhopal in 2015 when Tomar was first spotted by coaches.

This is Tomar's first stint at the senior level, having broken through following a string of strong performances in junior, most notable among them being the junior ISSF World Cup gold with a junior world record to boot.

He carried on that form, winning at the junior level in Asia and then beating the likes of Sanjeev Rajput in domestic competitions to stake a claim for selection in the senior team.

It was a top quality final field with a Chinese world number three and a Korean world number nine besides an experienced Yuri Yurkov of Kazakhstan and the in-form Mahyar Sedaghat of Iran.

There were two Chinese in the finals but they could not claim quotas as China had exhausted their maximum two in the event and Korea's Jonghyun had also sealed his quota at the Munich World Cup earlier in the year.

That left the shooters from Iran, Kazakhstan, Mongolia and Thailand besides Tomar, fighting for the three available Tokyo berths.

Enjoying a good run of form, Tomar had 151.7 after the first 15 kneeling position shots, 156.3 after the same number of shots in the prone position, before finishing with 449.1 to claim the bronze medal.

The Iranian and Kazakh claimed the other two quotas, finishing fifth and sixth respectively.

Tomar also won the team bronze in the event, combining with Chain Singh (1155) and Parul Kumar (1154). Individually, Singh finished 17th in the qualifications, while Parul Kumar was 20th.