Tiger Woods and Phil Mickelson will be in the same group at Doral for the first time this year. 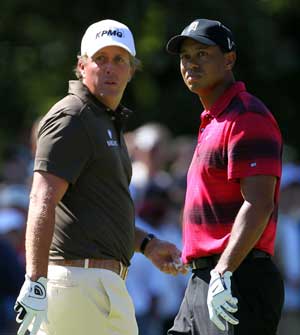 Tiger Woods and Phil Mickelson will be in the same group at Doral for the first time this year.

The Cadillac Championship decided to based the groups for the first two rounds on the rankings. It's similar to what the European Tour did in Dubai last month and the U.S. Open did at Torrey Pines in 2008.

That puts Martin Kaymer, the new No. 1., in the same group with Lee Westwood and Match Play winner Luke Donald. However, the greater focus will be on the next batch of players - Graeme McDowell at No. 4, Woods and Mickelson.

Woods and Mickelson have combined for 122 worldwide wins and 18 majors.

It will be the 27th time they have been in the same group. Mickelson has gotten the better of Woods recently. Woods has shot the lower score only once in the last eight times.

Comments
Topics mentioned in this article
Tiger Woods Phil Mickelson Other Sports
Get the latest updates on ICC T20 Worldcup 2022 and CWG 2022 check out the Schedule, Live Score and Medals Tally. Like us on Facebook or follow us on Twitter for more sports updates. You can also download the NDTV Cricket app for Android or iOS.