Lindsay Vonn said that she was determined to "just ignore the haters" who she said were trying to "tear me down". 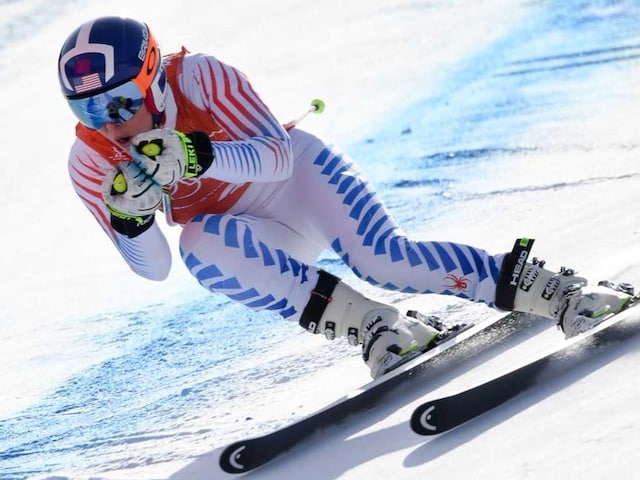 Lindsey Vonn admitted on Sunday that she was "hurt" by accusations that she is anti-American after the US ski star's outspoken stance against President Donald Trump. And Vonn, one of the most successful skiers of all time, said she plans to avoid speaking out again for the time being after she was subjected to abuse on Twitter for her opinions. Vonn, the 2010 Olympic downhill gold medallist, surprisingly failed to reach the podium in coming sixth in Saturday's super-G at the Pyeongchang Olympics. The race was won by Czech snowboarder Ester Ledecka in one of the biggest shocks in Winter Games history.

Vonn's disappointing performance was met with glee by some in the United States who did not take kindly to her comments saying that she would not visit Trump's White House if she won a medal.

Asked by AFP in Pyeongchang if she was "anti-American" -- a barb directed at her by her detractors -- she said: "That's so far from the truth. I'm the most American person you will ever find.

"I'm from Minnesota, from farmland, my family are solid, wholesome people and I love my country and I love competing for my country. I'm so proud to be here representing the United States.

"It hurts me when people say that because it's just not true."

The more poisonous comments directed at Vonn on Twitter -- of which she is a frequent user -- included people saying they hoped she suffers a serious injury in competition.

The flak flew Vonn's way in December when she told CNN that in South Korea, "I hope to represent the people of the United States, not the president".

Vonn said Sunday she was determined to "just ignore the haters" who she said were trying to "tear me down".

But the 33-year-old hinted that the backlash threatened to get in the way of her bid for a second Olympic gold -- she missed the 2014 Sochi Games with injury, and this will most likely be her last Olympics.

"I'd like to say a lot but I feel like right now is not the time because I need to focus on my races and that's what's most important to me right now," said Vonn, after clocking the fastest time in the first training run for Wednesday's prestigious downhill.

"I think later on, if I still have a voice, I will express more of my opinion, but now is not the time.

"My opinions haven't changed, I've just chosen to focus on my sport right now and after these races, when there's a good opportunity where I can make a positive impact, then I will speak up again, but not right now."