Sweden's Andre Myhrer took a shock slalom men's gold at the Pyeongchang Olympics on Thursday as the two favourites both spectacularly bombed out. 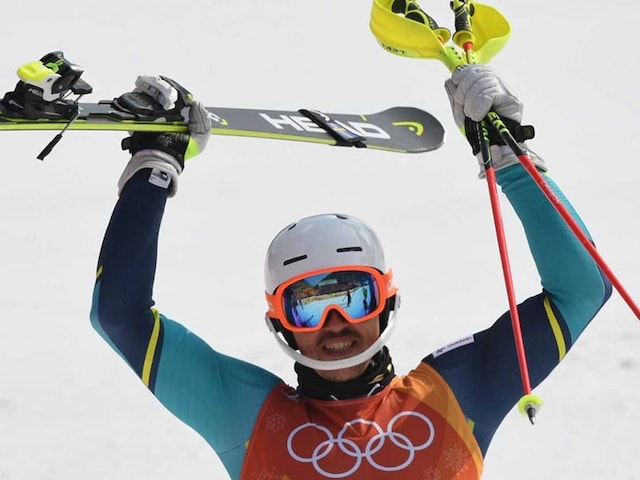 He also follows Ingemar Stenmark, who won the slalom and giant slalom in 1980, as only the second Swedish man to claim an Olympic alpine skiing gold.

"It means everything. I've been training my whole life for a moment like this," said the unheralded Swede, who also took slalom bronze in 2010.

"I took a medal in Vancouver, a bronze, but I've been always dreaming about the gold medal and now it's a reality and I'm totally blown away."

Myhrer said that he feared his chance had gone as he came to the end of his run.

"I haven't seen the split times but that was my feeling coming into the last part and I just tried to force everything I had," he said, after clocking a winning combined time of 1:38.99.

"And luckily it was enough to go home with the gold."

Myhrer could hardly believe his luck as favourites Hirscher and Kristoffersen bombed out.

He went into the second and final run in second place behind Kristoffersen, who went fastest in the morning and looked to have one hand on the title.

But nerves appeared to get the better of Kristoffersen, who was going last, and his dreams of a first Olympic gold were obliterated when he failed to finish his second run.

Just as surprisingly, Hirscher crashed out in the morning run, ruining his hopes of a golden hat-trick in South Korea.

Hirscher, 28, failed to find his rhythm on a course set by his own coach, Michael Pircher, and eventually missed a gate to fail to even make the second run.

Hirscher -- who had already won the men's alpine combined and giant slalom at these Games, his first individual Olympic titles -- revealed he had never been comfortable in the lead-up to the slalom, even in training.

"The feeling was really bad the whole week on slalom skis and this is the final result," he said.

"I had absolutely no confidence on this kind of snow. I skied really badly. This is what also can happen and is part of the game, part of the sport.

"You have success and sometimes you have not the best days."

Hirscher had been aiming to become only the fourth skier in history to win a third gold medal at a single Olympics, joining Austria's Toni Sailer (1956), Frenchman Jean-Claude Killy and Croatia's Janica Kostelic (2002).