In her last six Olympic races, short-track speed skater Elise Christie has crashed out or been disqualified six times. 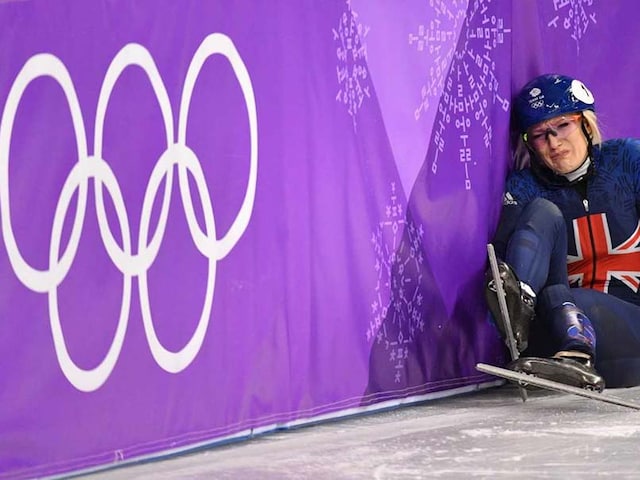 In her last six Olympic races, short-track speed skater Elise Christie has crashed out or been disqualified six times -- no wonder she's been dubbed "cursed" and "Britain's unluckiest Olympian". Christie is a world-record holder and triple world champion who came to the Pyeongchang Winter Games as one of Britain's few real hopes for gold. But the 27-year-old's Olympics ended in tears once more after she was disqualified from the 1,000m on Tuesday, her third failure in Pyeongchang. Christie's ill-fated campaign comes four years after she was disqualified from all three of her races at Sochi 2014.

The Scot's travails have been followed closely in Britain -- and met mostly with sympathy.

The Sun, the best-selling tabloid newspaper, branded her "cursed".

In her native Scotland, The Herald called her "Britain's unluckiest Olympian".

As Christie's Pyeongchang Games came to a dismal end, penalised for a rule infraction, she left the rink in tears.

She also departed the arena in tears on Saturday -- in pain and on a stretcher -- after being wiped out in a collision with a Chinese rival in the 1,500m.

Christie also crashed out in the final of the 500m, in which she is the world-record holder.

However, it hasn't deterred Christie, who said she will make another tilt at an Olympic medal at Beijing 2022.

"In terms of me as a person, I didn't see this as, 'This is the Olympics and that's why it happened'," she said.

"I guess with Sochi that's how I had seen it, like I wasn't supposed to be an Olympic medallist, it wasn't in me.

"I don't see that now, I just see it as three races that went rubbish in the last four years."

Short track is a notorious for its crashes and penalties. In the women's 1,000m heats on Tuesday, six skaters were disqualified.

And in the women's 3,000m relay A final, only two of the four teams finished the race.

One reason is that the skaters race in such close proximity to one another, often bumping and tripping while whizzing round the rink at speeds of up to 50 kilometres (30 miles) per hour.

But not everyone is convinced it is merely bad luck that is plaguing Christie.

"In a sport of such fine margins, the gap between success and failure is minuscule and unforgiving," the newspaper said.

"Perhaps Christie's attitude that 'it's just unlucky it's happened at both Olympics' is a healthy outlook from a sanity perspective.

"But, equally, it is worth asking the difficult questions as well, because talent is not the problem."

The Guardian took a similar line, pondering whether she was too aggressive, too daring or simply cracked under the pressure.

"After rewatching all of Christie's races in Sochi and Pyeongchang there is a case to be made that her all-or-nothing approach narrows the gap between glory and disaster by too great a margin," said the Guardian.

"Hers is a muscular style, an eye-of-the-needle approach, a gold-or-bust attitude."