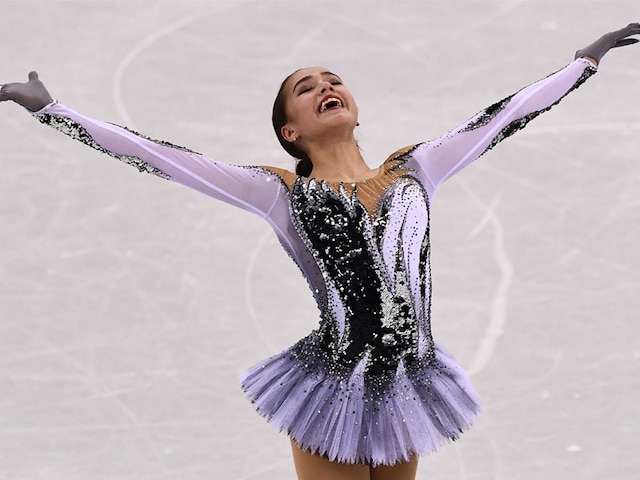 Record-breaking Alina Zagitova, 15, stole the show in figure skating on Wednesday as America's Lindsey Vonn wound up her Olympic downhill career by becoming the oldest female alpine ski medallist in Games history. Zagitova was breathtaking in the Russian-dominated short programme, breaking the world record set just minutes earlier by her team-mate, 18-year-old Evgenia Medvedeva. It put the Russians top of the standings ahead of Friday's free skate, where Zagitova will attempt to become the youngest women's singles figure skating champion since Tara Lipinski in 1998.

They also look set to win the first gold of the Games for the Olympic Athletes from Russia, who are competing as neutrals after Russia's national team was banned over a major doping scandal.

"We are friends, we are young girls, we can talk about anything with each other," said Medvedeva, 18, who like Zagitova is making her Olympic debut.

"But on the ice, we must fight, I feel like it's a little war, when you skate you are alone," added the double world champion.

America's Vonn, 33, was aiming for a second downhill title in her final Olympics, but it was not to be as she finished third behind Italy's Sofia Goggia and Ragnhild Mowinckel of Norway.

But the 2010 winner was delighted to reach the podium -- the oldest female alpine skier to do so -- after a series of injuries threatened to wreck her career and ruled her out of Sochi 2014.

"If you think what's happened over the last eight years and what I've been through to get here, I gave it all and to come away with a medal is a dream come true," said Vonn.

"You've got to put things into perspective. Of course, I would have loved a gold medal but, honestly, this is amazing and I'm so proud."

There was disappointment for the United States when their men's ice hockey team, missing NHL players after a row over money, crashed out 3-2 in the quarter-finals against the Czech Republic.

In other action on Wednesday, Russian skier Sergey Ridzik recovered from a crash in the ski cross final to take bronze, behind Canada's Bredy Leman and Marc Bischofberger of Switzerland.

Ridzik went down early in the race but he got up, clambered to the top of a slope and restarted his run, coming in behind the front two as Canada's Kevin Drury failed to finish.

The competition, where four skiers race each other down a twisting track featuring a number of jumps, was marred by a series of heavy falls.

Later on Wednesday, the women's bobsleigh will feature trailblazing Nigeria, who are the first athletes from their country to compete at a Winter Olympics.

Thirty years after the Jamaican men's team of "Cool Runnings" fame, Jamaica's women will also race, following a turbulent build-up in which they lost their coach just days ahead of competition.