Indian women too had an easy qualification group and they progressed to the preliminary round of the singles event. 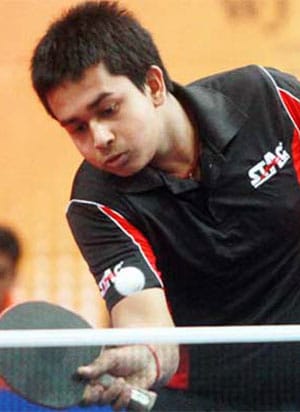 Indian players got off to a good start with Soumyajit Ghosh, Harmeet Desai and Sanil Shetty winning their respective first rounds matches of the men's preliminary qualification event at the World Table Tennis Championships in Paris.

Indian women too had an easy qualification group and they progressed to the preliminary round of the singles event. Mouma Das, K Shamini, Madhurika Patkar and Neha Aggrawal won their respective matches on Tuesday to advance to the round of 128.

In the men's opening round preliminary encounters, Ghosh defeated Zokhid Kenjaev of Uzbekistan 4-2, Desai blanked Pablo Tabachnik of Argentina 4-0, while Shetty got the better off Gautemala's Jose Migue Ramirez 4-1, to reach Round of 64 (Prelim).

To enter into the main draw of the tournament, the players (both men and women) will be required to enter the round of 32.

Achantha Sharath Kamal is already in the main draw of the competition.

Madhurika Patkar too had an easy outing today as she beat Ann Silva of Portugal 4-0.

Comments
Topics mentioned in this article
Table Tennis Soumyajit Ghosh Other Sports
Get the latest updates on ICC T20 Worldcup 2022 and CWG 2022 check out the Schedule, Live Score and Medals Tally. Like us on Facebook or follow us on Twitter for more sports updates. You can also download the NDTV Cricket app for Android or iOS.