Recollecting the incident, Arunima, a resident of Ambedkar Nagar in Uttar Pradesh, said she was pushed out of the general compartment of Padmawati Express for resisting a chain-snatching attempt by some hoodlums, while travelling from Lucknow to Delhi on April 12, 2011 and suffered critical injury in the right leg. 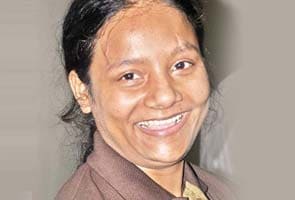 National-level volleyball player Arunima Sinha, who had lost her right leg after being thrown off a moving train in Bareilly two years ago, is all geared up to climb the world's highest peak -- the Mt Everest.

Arunima, who now uses an artificial limb, will be accompanied by Sushen Mahto in the expedition to climb the highest peak of the world, announced Sajiv Paul, Vice-President (Corporate Services) of Tata Steel, who flagged off the expedition to Mt Everest on Friday.

Both the mountaineers were present on the occasion.

They will be leaving here for Delhi tomorrow and start the trekking in Island peak for acclimatisation before setting out for the base camp, Paul said.

They are likely to begin the expedition in the second week of May, he said.

Recollecting the incident, Arunima, a resident of Ambedkar Nagar in Uttar Pradesh, said she was pushed out of the general compartment of Padmawati Express for resisting a chain-snatching attempt by some hoodlums, while travelling from Lucknow to Delhi on April 12, 2011 and suffered critical injury in the right leg.

She lost her leg after she underwent a surgery at the Chattrapati Shahuji Maharaj Medical University in Lucknow as the doctors had to amputate to prevent the spread of infection.

Calling her four-month experience in the hospital bed in All India Institute of Medical Science, Delhi as "bitter", she said that was the place where she had decided to do something different and send out a message to the world that disability was not at all a hindrance in the path of success, provided one is dedicated.

Appreciating her elder brother Om Prakash, a former army man, for motivating her to achieve the goal, Sinha said the confidence level further enhanced when she met the first woman to conquer the Mt Everest, Bachendri Pal, the chief of Tata Steel Adventure Foundation (TSAF), soon after she was released from the hospital.

Sinha, who had just returned from training in Uttarkashi mountain range where the team identified a new route in waist-deep snow in Mugdatal, said she had undergone training under the guidance of Pal and was confident that she would hoist the tri-colour atop the peak. Tata Steel will sponsor the expedition of both the mountaineers, Paul said.

Comments
Topics mentioned in this article
Harbhajan Singh Yuvraj Singh Volleyball Other Sports
Get the latest updates on ICC Women's Cricket World Cup 2022 and IPL 2022, check out the Schedule , Live Score and IPL Points Table. Like us on Facebook or follow us on Twitter for more sports updates. You can also download the NDTV Cricket app for Android or iOS.