Mihu Maselo and Yumi Sorang, who were the only two Arunachal archers in the 24-member squad, were given stapled Visas issued on a separate papers as the immigration officials prevented them from boarding the 11.10 pm flight to Guangzhou. 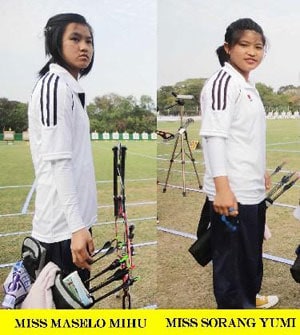 Mihu Maselo and Yumi Sorang, who were the only two Arunachal archers in the 24-member squad, were given stapled Visas issued on a separate papers as the immigration officials prevented them from boarding the 11.10 pm flight to Guangzhou.

Archery Association of India President V K Malhotra told PTI that the Chinese Airlines Authorities denied the two archers from boarding the flight, saying that they will not be allowed to enter China as they don't have affixed visa on their passport.

"The Chinese embassy issued the stapled visa to the two Arunachal archers and they said there should not be any issue. But when they were to board the flight, the Chinese airlines authorities said the two archers will not be allowed to enter China by the immigraion department there," Malhotra said.

Confirming the incident, AAI assistant secretary Gunjan Abrol told PTI:"It's a political issue as China considers the state 'disputed'. For no fault of theirs, the two poor archers were heartbroken. These two Arunachali archers are very young, both 1999 born and they are very upset. We were surprised that the Chinese airlines authorities told us that the two archers cannot board the flight despite all their travel documents are in order," he said.

"Since the stapled visa was issued by the Chinese Embassy, we thought there should not be any problem," Abrol added.

The two female archers are kept at the Delhi Lawn Tennis Association (DLTA) Guest House. China has been in practice of issuing stapled Visas --unlike the normal stamped Visas on an individual's passport --to residents of Arunachal Pradesh and Jammu and Kashmir which it considers disputed.

The practice of issuing stapled visas to residents of Arunachal Pradesh came to light in January 2011 when two weightlifters belonging to the state were prevented by immigration officials from boarding a flight from New Delhi to Beijing since they had such visas issued by the Chinese Embassy on their passports.

India has been protesting the issuing of stapled visas by the Chinese to the residents of Arunachal Pradesh. India considers as 'invalid' the stand-alone Chinese 'paper' visas given to some of its nationals and the contentious issue has been taken up with the highest levels of the Chinese government.

The girls came back to the Sports authority of India (SAI) hostel in Delhi while the other archers have left for Beijing.