Tom Brady became the first quarterback in history to win five Super Bowls after the Patriots overturned a 28-3 third quarter deficit to snatch a sensational victory at Houston's NRG Stadium. 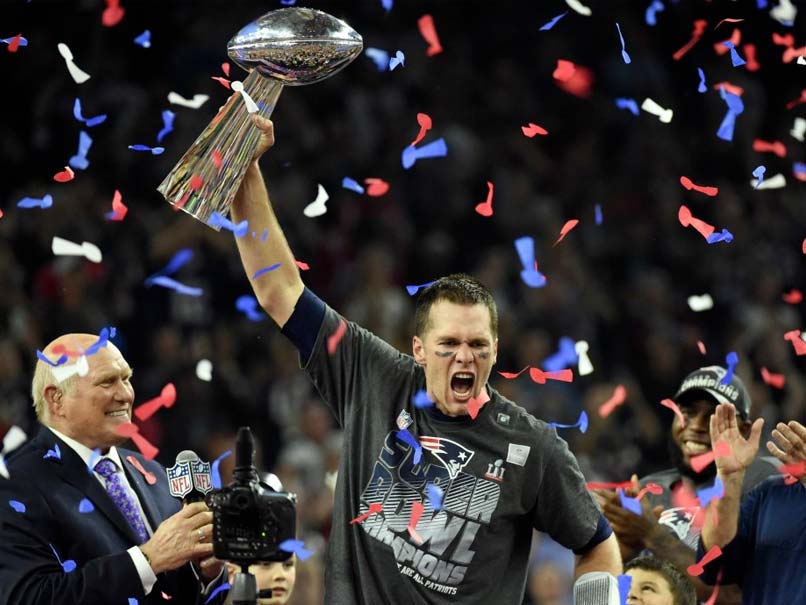 Brady became the first quarterback in history to win five Super Bowls after the Patriots overturned a 28-3 third quarter deficit to snatch a sensational victory at Houston's NRG Stadium.

Brady, 39, collapsed to the turf with emotion after James White burrowed over from close range to score the winning touchdown on the opening drive of overtime.

It completed an incredible comeback for the Patriots, who had looked dead and buried after the Falcons scored three first half touchdowns and an early score in the third quarter to power 25 points clear.

No team had ever come back from more than 10 points to win the Super Bowl before, and the Patriots looked to be heading for a crushing defeat as the Falcons ran riot.

But Brady, who had looked a pale imitation of himself for much of the game, suddenly fired into life in the second half to produce a performance that will go into National Football League folklore.

The Falcons, who had gone into the game boasting one of the most potent offenses in history, were left distraught and still waiting for their first ever Super Bowl.

They had appeared to be roaring to the championship with quarterback Matt Ryan pulling apart the Patriots in the first half.

The Falcons scored touchdowns through Devonta Freeman and Austin Hooper before Robert Alford picked off Brady for an 82-yard interception score.

The Patriots could only muster a Stephen Gostkowski field goal to go into half-time 21-3 down.

A shellshocked Brady looked bereft after his interception blunder and it got worse for the Patriots early in the third quarter.

The misfiring Patriots offense again squandered their next possession and Atlanta were back on the charge, powering forward with a nine-play drive that ended with Ryan lobbing a six-yard pass to Tevin Coleman for a touchdown.

New England grabbed what looked like a consolation score when Brady found running back White to make it 28-9.

But Gostkowski missed the extra point afterwards, and it seemed as if all Atlanta had to do was ride out the clock.

But a further Gostkowski field goal made it 28-12 and when Brady hit Danny Amendola for a six-yard touchdown, with a successful two-point conversion to follow, it had suddenly become a one-score game.

Now the Falcons were flustered and a crucial drive faltered and the Patriots won the ball back.

Brady marched his team upfield and White scampered in from one yard to make it 28-26. Another two-point conversion followed to make it 28-28 and take the game to overtime for the first time in history.

The Patriots won the toss and elected to receive and with momentum clearly on their side, there was only going to be one outcome.

Brady, just as he had done in his first Super Bowl victory in 2002, nervelessly led his team upfield and soon they were camped on the Atlanta line.

It was left to White to score his third touchdown of the night to clinch an amazing victory.