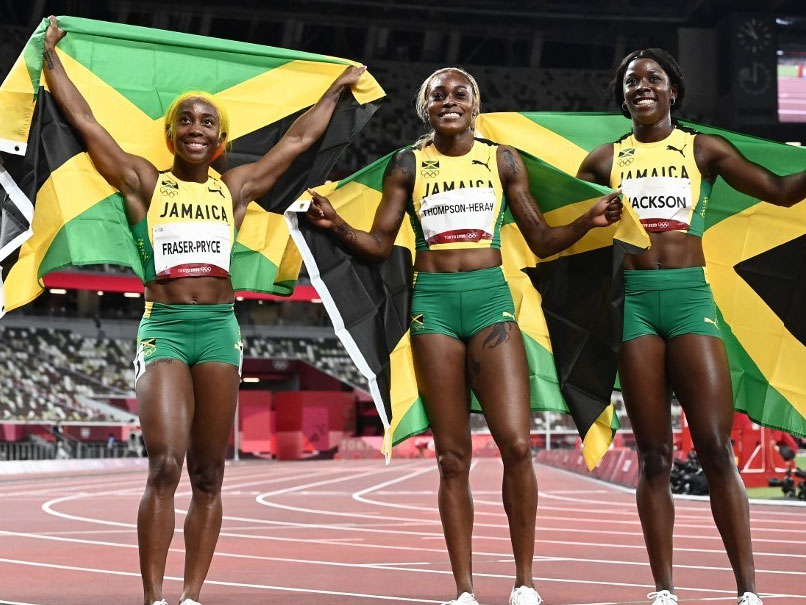 Jamaica's Elaine Thompson-Herah successfully defended her Olympic 100m crown on Saturday, storming to victory with the second fastest time in history. Thompson-Herah raced over the line at Tokyo's Olympic Stadium in 10.61sec, with two-time champion Shelly-Ann Fraser-Pryce taking silver in 10.74 and Shericka Jackson bronze in 10.76. Thompson-Herah's Olympic record winning mark matched the second-fastest time in history of 10.61 set by the late Florence Griffith-Joyner.

Only Griffith-Joyner, the 1988 Olympic champion who remains the world record holder with a best 10.49, has ever run faster.

The pre-race hype had focused on Fraser-Pryce, who until Saturday had been the fastest woman in the world over the distance this year.

The 34-year-old had been bidding to become the oldest sprinter to ever win an Olympic 100m title, and the first woman to win three individual track and field golds.

But in sultry conditions at an empty Olympic Stadium, it was 2016 Rio gold medallist Thompson who seized the moment.

"I am really excited to come back and retain my title. My chest hurts, I am so happy," Thompson-Herah said.

Before the race, the stadium was plunged into darkness as the finalists were introduced under a spotlight bearing down on the starting area.

Thompson-Herah looked stony-faced as she focused on the challenge ahead in the lane next to Fraser-Pryce.

Fraser-Pryce got out of the blocks smoothly but once Thompson-Herah hit her stride there was only going to be one winner.

She drew level with Fraser-Pryce after around 60 metres and pulled clear, pointing and gesticulating in delight at the electronic board displaying her winning time as she crossed the line.

Thompson-Herah had earlier given a clue she was in prime form with a dominant display in the semi-finals, romping home in 10.76 despite easing up well before the finish line.

Comments
Topics mentioned in this article
Athletics Olympics 2020
Get the latest updates on IPL Auction 2023 and check out  IPL 2023 and Live Cricket Score. Like us on Facebook or follow us on Twitter for more sports updates. You can also download the NDTV Cricket app for Android or iOS.