In New York, Deepika Pallikal's dream run ended when the Indian went down to World No.1 Nicol David from Malaysia who won 11-7, 11-5, 11-4 in the quarter-final of the Carol Weymuller Open tournament on Friday. 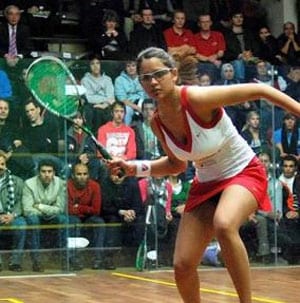 Ghosal, 27, the highest-ranked Indian of all time who celebrated a best-ever World number 17 this month, took less than an hour to subdue the 30-year-old Azaiz and set up a clash with World No.9 and top seed Spaniard Borja Golan.

In New York, Deepika Pallikal's dream run ended when the Indian went down to World No.1 Nicol David from Malaysia who won 11-7, 11-5, 11-4 in the quarter-final of the Carol Weymuller Open tournament Friday.

"My aim was to keep her moving because she is so good when she has time," said David afterwards. "I managed to put my game plan together and my shots came in at the right time."

Pallikal, who upset Australia's No.8 seed Kasey Brown to make it to the quarters, said: "I'm tired after my long match yesterday. When you play Nicol, you have to be fresh to have a chance.

"I started well in the first game and she just got tighter in the second and third which made me go for more shots and she just got onto the balls. I've had a good tournament and I've got a lot to learn.

"It's all a learning process for me. I really made use of this tournament, and hopefully I'll come back in a week or so in Macau and play well. You've got to take the positives and learn from it."