South Africa overpowered England 32-12 with a brutally effective forward display to win their third World Cup in Yokohama on Saturday. 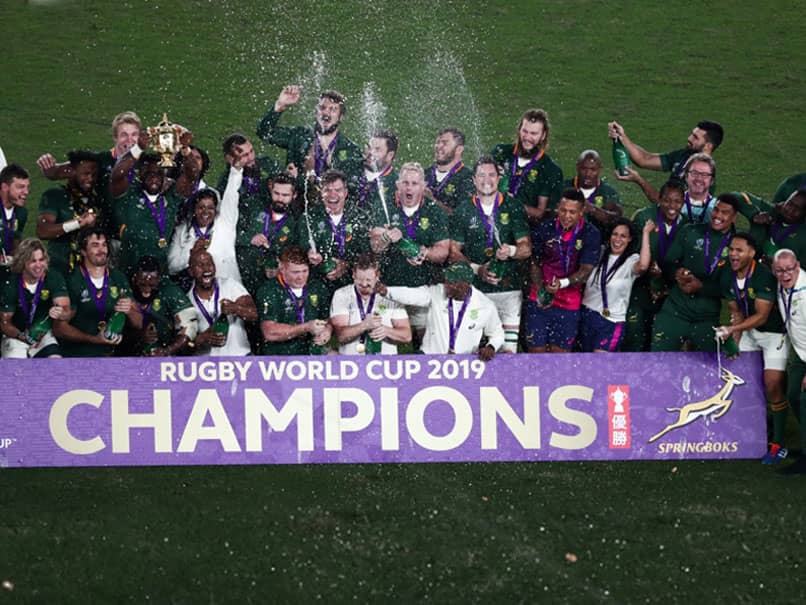 South Africa overpowered England 32-12 with a brutally effective forward display to win their third World Cup in Yokohama on Saturday. The Springboks' victory was built on a colossal display by their powerhouse pack that allowed fly-half Handre Pollard to kick six penalties before Makazole Mapimpi's 66th-minute try -- the first the Springboks had scored in a World Cup final -- and another from fit-again fellow flyer Cheslin Kolbe put the result beyond doubt. Victory ensured South Africa made it three wins from three World Cup final appearances and maintained their record of being crowned champions at 12-year intervals following their 1995 and 2007 triumphs.

Saturday's win also saw South Africa become the first team to win a World Cup having lost in pool play, with the Springboks beaten by reigning champions New Zealand in their Japan 2019 opener.

It was a tactical triumph for South Africa coach Rassie Erasmus, who has overseen a Springbok revival after taking charge two years ago following a miserable 2016, and an inspirational moment for captain Siya Kolisi, the team's first black captain.

For England, four years on from the humiliation of their first-round exit on home soil in 2015, which led them to appoint Australian coach Eddie Jones, it was a match too far after their quarter-final and semi-final wins over Australia and New Zealand.

A third defeat in four finals for England was also their second by South Africa, who defeated them 15-6 in the 2007 showpiece when Jones was a consultant to the Springboks.

And it meant there was no repeat of England's 2003 World Cup final triumph when they beat an Australia side coached by Jones.

England suffered a cruel blow in just the third minute when prop Kyle Sinckler went off after colliding with team-mate Maro Itoje as the lock tried to tackle Mapimpi.

South Africa's forward pressure was rewarded in the ninth minute when England captain Owen Farrell was penalised for holding on.

Farrell equalised but South Africa forced a scrum penalty which Pollard, the goal-kicking hero of their 16-13 semi-final win over Wales, landed.

England, who had made such an impressive start to their stunning 19-7 semi-final victory over New Zealand, were struggling to get their backs into the game but Ford's penalty allowed them to win a line-out the edge of the Springboks' 22.

At last England could launch wrecking-ball centre Manu Tuilagi as they drove to within a metre of the Springboks' line, but excellent rush defence stopped them in their tracks before Farrell's 35th-minute penalty again levelled the match at 6-6.

Pollard, however, ensured South Africa led again with a 47-metre penalty and they were 12-6 up at the break after veteran prop Tendai 'Beast' Mtawarira forced Dan Cole, Sinckler's replacement, into conceding a scrum-penalty again kicked by Pollard.

Early in the second half, Erasmus ensured there was no let-up by bringing on props Steven Kitshoff and Vincent Kock -- two of six forwards from among his 'bomb squad' of replacements -- and their very first set piece saw England concede a fourth scrum penalty of the game.

Pollard was again on target from the tee.

England, however, managed a scrum penalty of their own in the 50th minute and Farrell succeeded from some 40 metres to cut South Africa's lead to 15-9.

South Africa, making no secret of their tactics, formed a nine-man maul that forced England offside in the backline to give Pollard a simple penalty in front of the posts that put the Springboks two scores ahead at 18-9.

Farrell, England's lone points-scorer, reduced the gap only for the Springboks to surge clear.

There were two hints of a forward pass in the build-up to Mapimi's try after his kick ahead was passed back to him by centre Lukhanyo Am, but referee Jerome Garces let the score stand after consulting the television match official.

But there was no doubt about Kolbe's effort as he sped past Farrell and prop Joe Marler.