Patna, aiming to pocket their fourth consecutive title, looked completely out of sorts in the first period. 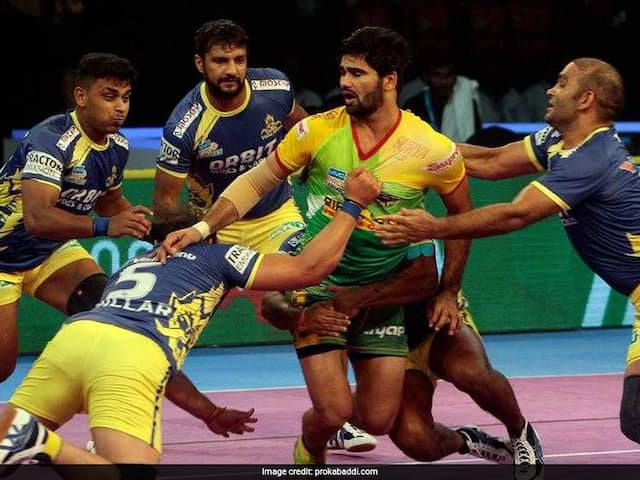 Tamil Thalaivas stunned defending champions Patna Pirates 42-26 to end their winless run at home in the opening game of the Pro Kabaddi League (PKL) here at the packed Jawaharlal Nehru Indoor stadium in Chennai on Sunday. Patna, aiming to pocket their fourth consecutive title, looked completely out of sorts in the first period, getting all out on two occasions as lacking offensive as well as defensive skill to trouble the home team who looked stronger in both departments.

India captain Ajay Thakur starred for the hosts with a total of 14 raid points, seven of the them in the first essay, as fellow raider Surjeet Singh also bagged seven to delfate their rivals from the outset.

Amit Hooda defended excellently while seasoned campaigners Jasvir Singh and all-rounder Manjeet Chhillar were also on song as Patna were first all out with the score reading 10-2 inside the first ten minutes, and then falling further behind 23-8 towards the end of the first half.

After the first all out, Patna skipper Pardeep Narwal recovered from a poor start where he was sent out of the mat in his first raid to grab two points and usher hopes of a revival.

From 11-2, the hot favourites going into the tie clawed back to make it 11-5 riding Pardeep Narwal's efforts.

But Thakur, was in the mood and continued to raid venomously to leave the visitors reeling at 26-8 during the break.

The script did not change in the second half as Patna were all out for the third time soon after the restart.

With the gulf between the two teams widening to 24 points after the all out, a comeback looked nearly impossible despite Pardeep Narwal's (11 raid points) efforts.

Patna even managed to inflict an all out on their more superior rivals on the day, but it was little too late as the Tamil Thalaivas ended their barren run at home in style.

The three-month format - introduced last year - continues in Season 6 as the 12 participating teams are divided into two zones of six teams each.

Every team will play a set of 15 intra-zone and seven inter-zonal matches - in the 'Inter-zonal challenge week'.

The top three teams of each zone will then head to the play-offs, comprising the qualifiers and eliminators, in which the top-ranked team from the two zones will get one extra opportunity to qualify for the final.