Talking about match between Advani and Allen, the 'smiling assassin' 27-year-old Bangalorean put paid to the hopes of Allen in a commanding fashion. 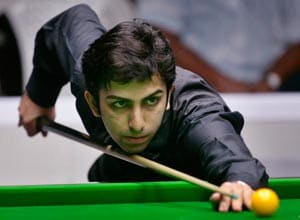 Both Advani and Mehta reigned supreme on the green baize and proved why they are indeed the country's poster boys of cue sport.

While the eight-time world champion Advani, ranked 70th in the world, stamped his class with a 4-2 win over world number 11 Allen in the final round of 32 match, the Cali World Games gold medallist Mehta had a 4-1 win over England's Hammad Miah.

Both the cueists will be seen in action tomorrow with Advani up against world number 12 England's Stuart Bingham while Mehta playing two-time world champion Mark Williams.

Talking about match between Advani and Allen, the 'smiling assassin' 27-year-old Bangalorean put paid to the hopes of Allen in a commanding fashion.

The Northern Island cueist was in great form entering the tournament remaining undefeated from last week's Ruhr Open held in Germany. Little did he know that the lower-ranked but highly dangerous Indian would break his streak.

Advani started the match with a break but was not enough to seal the frame. Allen used his experience to wrap it up taking a 1-0 lead.

Advani bounced back with a reply of 55-clearance to win the second frame, not allowing Allen to score a single point.

The Indian continued the third frame with a 71 break and took a 2-1 lead.

Allen drew parity capitalising on an Advani error. Evenly poised, the match had a lot more in store and for the local fans, their lad did not disappoint.

Advani with some fine tactical safety and aggressive potting pocketed the next two frames convincingly to knock out Allen and extend his own form by storming into the last 16 stage.

Comments
Topics mentioned in this article
Badminton Other Sports
Get the latest updates on ICC T20 Worldcup 2022 and CWG 2022 check out the Schedule, Live Score and Medals Tally. Like us on Facebook or follow us on Twitter for more sports updates. You can also download the NDTV Cricket app for Android or iOS.