Advani, India's poster boy of cue sports, will be competing in the major snooker ranking event scheduled to be held in Chengdu, China from October 27 to November 3. 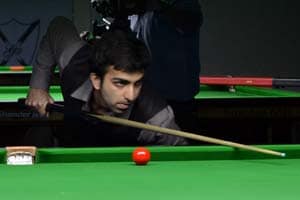 For the first time in his career, Pankaj Advani has decided to skip the World Billiards Championship in Leeds, instead preferring to compete in the International Championship.

Advani, India's poster boy of cue sports, will be competing in the major snooker ranking event scheduled to be held in Chengdu, China from October 27 to November 3.

Advani made the "tough decision" not to defend his World Billiards title this year, which he had won after beating defending champion and seasoned Englishman Mike Russell 1895-1216 in the final, due to clash of dates with the International Championship.

This is the second year in a row he has qualified for the China event, with the dates again clashing with the World Billiards Championship.

On being asked about his decision, Advani told PTI: "This was a very tough decision for me. But in my career, I have had to make many such decisions throughout, be it in the Asian Games of 2006, where each player could only play in one discipline, snooker or billiards."

"The choice of billiards paid off with a gold medal. Last year, I had the same decision to make (International Championship or World Billiards Championship). That too had the best possible outcome with world title number 8.

"This time, I want to focus on snooker a little more. I have had my share of success in the 3-ball game and want to extend that to snooker now. But yes, the decision was yet another difficult one given this will be the first time I will be skipping the World Billiards Championship ever since I first started playing in it," added Advani.

When questioned about his preference for snooker over billiards, Advani replied, "This is not a long-term decision. While I'm in the flow of snooker, I want to optimise my performance. There are another six months to go in the season and I would like to give it my all. I will assess my plans after the season."

Advani, in fact, has had success in snooker too, becoming the youngest Indian to win the non-professional IBSF World Snooker Championship in 2003 in China - his first world title.

Thereafter, all his world crowns have been in billiards, both non-pro and pro.

In his debut season on the snooker professional circuit, Advani became the first and only Indian to make it to the semifinals of the Paul Hunter Classic held in Germany in August 2012.

He followed that up with another first for India, reaching the quarterfinals of the Welsh Open earlier this year.

The Billiards and Snooker Federation of India have worked along with World Snooker to conduct the inaugural Indian Open in New Delhi next week.

Will China prove lucky again for India's leading cueist a decade later in the International Championship? Only time will tell.