The Super Rugby Aotearoa game was played in a festival atmosphere at the Forsyth Barr Stadium just six days after New Zealand declared itself free of COVID-19 and lifted restrictions on mass gatherings. 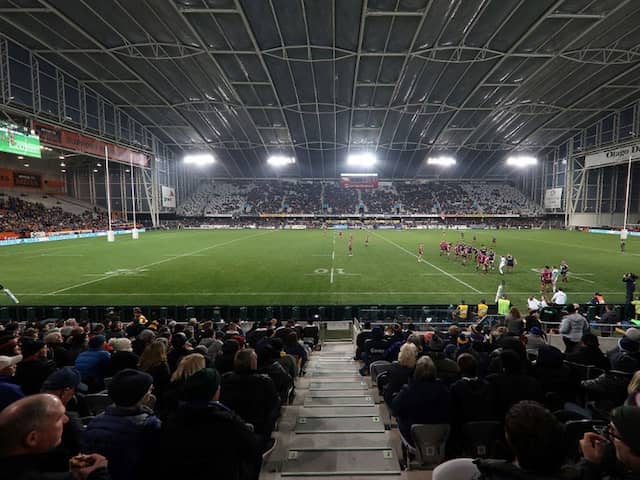 More than 20,000 fans witnessed the Otago Highlanders edge a 28-27 thriller against the Waikato Chiefs.© AFP

More than 20,000 fans witnessed the Otago Highlanders edge a 28-27 thriller against the Waikato Chiefs on Saturday as New Zealand welcomed the return of live sport after the coronavirus. The highest profile sports fixture worldwide since the pandemic, and one of the first with an unrestricted crowd, did not disappoint, as Bryn Gatland's last-gasp drop goal settled a nail-biter in Dunedin. Gatland drilled the winning points in the 79th minute, denying the Chiefs -- who are coached by his father, ex-Wales boss Warren -- after they had snatched the lead with their own drop goal just a minute earlier.

The Super Rugby Aotearoa game was played in a festival atmosphere at the Forsyth Barr Stadium just six days after New Zealand declared itself free of COVID-19 and lifted restrictions on mass gatherings.

Gatland was only brought on to the bench for the Highlanders after Josh Ioane pulled out with a groin strain, and came on for his game-winning cameo near the end.

In a tense finish, Damian McKenzie's drop goal put the Chiefs ahead, only for Gatland to settle the contest with his long-distance reply from nearly 40 metres.

"I never imagined it would be like that," Highlanders captain Ash Dixon said.

"It wasn't perfect but we gutsed it out and playing a quality side like the Chiefs we just kept trying to compete as much as we could and managed to just be on the right side of the ledger at the end."

As fans flowed through the gates there was no sign of face masks or sanitiser -- or the cardboard cut-outs used to fill empty stadiums in other countries where crowds are still barred.

"I don't really have any health concerns," said one fan, who gave his name as Peter.

Another spectator, Wendy, said she feared New Zealand would have stayed locked down longer "but I'm happy that we're not. Nobody's wearing masks, it's good".

South Africa broadcaster Kaunda Ntunja tweeted: "Watching live rugby with a crowd at the stadium is something I didn't think I would see anytime soon. I'm bloody happy. I'm sure rugby fans all over the world have the same feeling right now."

The Highlanders had only one win from six games compared to the Chiefs' four when the 15-team, five-nation Super Rugby was suspended in March because of the coronavirus.

But they looked a sharper unit, despite two yellow cards and problems at the breakdown in the opening game of Super Rugby Aotearoa, an interim domestic replacement for the wider championship.

The fast-paced encounter was marred by a high count of 30 penalties, 17 against the Highlanders, with referee Paul Williams putting a special focus on breakdown infringements.

In a see-sawing first half, the Highlanders took an early lead from a Mitch Hunt penalty and after falling behind to a pair of McKenzie penalties, they hit the front again with Hunt converting tries by Ash Dixon and Sio Tomkinson.

The Chiefs, finding space out wide, struck back with a Sean Wainui try and another McKenzie penalty, before Marino Mikaele-Tu'u scored on the stroke of half-time for the Highlanders to turn with a 22-16 advantage while down to 14-men with Vili Koroi in the sin-bin.

After McKenzie and Hunt traded penalties in the third quarter the Chiefs regained the lead with an Anton Lienert-Brown try and McKenzie's drop goal before Gatland sealed the match.