New York Governor Wants To "Bring Sports Back", Even Without Fans

Governor Andrew Cuomo said he had spoken to several sports team owners and he speculated that for some it might make economic sense to play before empty stadiums. 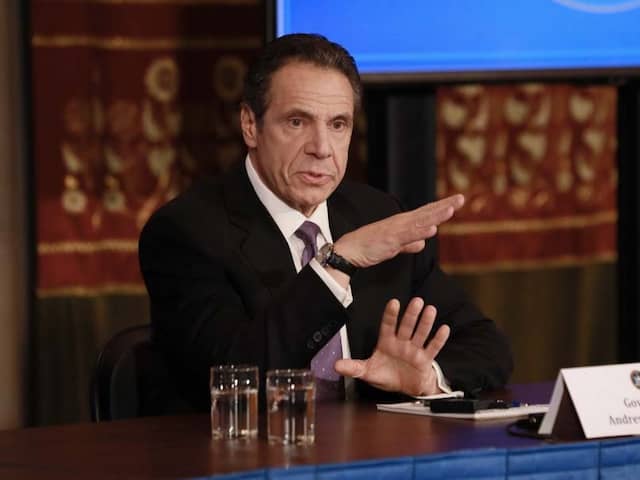 The governor of New York raised the possibility of some major-league sports teams returning.© AFP

The governor of New York raised the possibility Sunday of some major-league sports teams returning to the playing field or arena -- only with no fans in the stands. Governor Andrew Cuomo said he had spoken to several sports team owners -- he did not name them, but New York's teams include the iconic Yankees baseball team, as well as football, hockey and basketball clubs -- and he speculated that for some it might make economic sense to play before empty stadiums. Cuomo made the remarks during a daily briefing on the coronavirus in his state, the hardest hit in the US by the pandemic.

He also sketched plans for slowly reopening the state's economy, saying manufacturing and construction firms may resume working on May 15, but any easing would first take place in the north of the state where the virus has been less a problem.

But he noted that weeks of enforced confinement have taken a psychological toll on New Yorkers, and said a resumption of sports competition could help.

"We want to bring sports back, so there's an activity that people can watch on TV," he told reporters.

Cuomo said that while he was no expert on sports economics, some sports might earn enough in television revenues that they could make a go of it even without ticket sales.

Virtually all organized sports in the country -- professional and amateur -- have been halted since mid-March over concerns about the risks posed when large groups of fans crowd together.

There are a few exceptions: World Wrestling Entertainment (WWE) has been authorised to operate in Florida, where it is classified as an essential service.

Several horse-racing tracks, in Florida and elsewhere, are also operating though before empty stands.

It remains unclear when the profusion of sports teams across this sports-crazed country will again be able to take to the field.

Cuomo said determining the financial calculus of returning to play was not part of his portfolio. But he urged team owners to "be creative -- try to figure it out."

Andrew Zimbalist, a specialist in sports economics at Smith College in Massachusetts, said that US major-league teams earn an average of at least 40 percent of their revenue from ticket sales.

But for minor-league teams and others, ticket sales account for a greater share of revenue since they earn much less from selling broadcast rights.