Mikaela Shiffrin became the first woman to secure a half century of race victories before her 24th birthday, which she will celebrate in March next year. 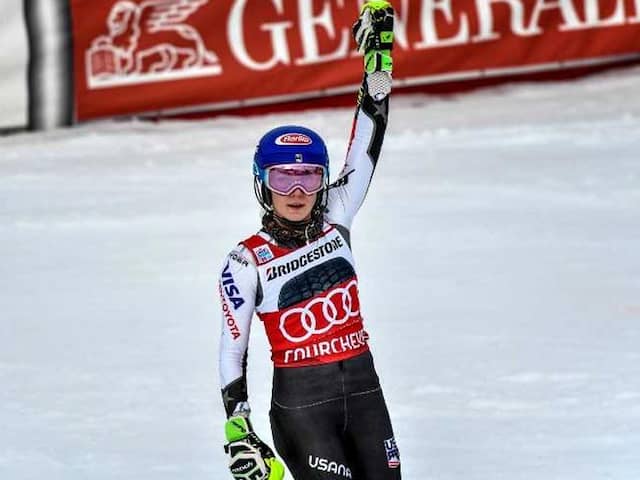 Mikaela Shiffrin finished 0.29sec ahead of Petra Vlhova to claim the victory.© AFP

American Mikaela Shiffrin became the youngest woman to win 50 World Cup ski races with victory in the slalom in the French Alps on Saturday. The 2014 Olympic champion, who led after the first run, finished 0.29sec ahead of Slovakia's Petra Vlhova and 0.37sec ahead of Sweden Frida Hansdotter in third place to win in Courchevel. Hansdotter predicts further success for Shiffrin. "She can beat all the records possible. To have won everything she has won at 23 is so impressive," she said.

The Olympic champion becomes the first woman to secure a half century of race victories before her 24th birthday, which she will celebrate in March next year.

Shiffrin won Friday's giant slalom by overcoming a 0.08sec deficit and blizzard-like conditions. Victory on Saturday was her fourth consecutive win in the French resort.

Sweden's Ingemar Stenmark leads the record for both men and women with 86 career successes.

Shiffrin's fellow US racer Lindsey Vonn has the most female wins with 82 victories across all five alpine disciplines. Vonn is expected to return to the circuit early in 2019 after recovering from injury.

Shiffrin leads the overall standings on 889 points after 13 out of the 38 events, twice as many as both Slovakian Vlhova in second place and Norway's Ragnhild Mowinckel in third combined.

She can continue her already illustrious career by adding a fourth World Championship to her name in Are, Sweden in February.